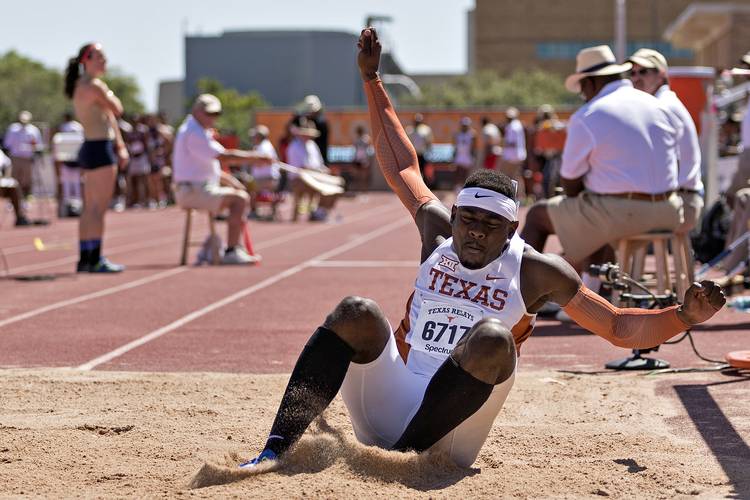 UT's athlete O'Brien Wasome competes in the triple jump at the Texas Relays at Myers Stadium on March 31, 2017. Daulton Venglar/AMERICAN-STATESMAN

Despite the outbreak of the coronavirus, Texas track and field coach Edrick Floréal expressed optimism on Tuesday that the Texas Relays will go on as planned.

Floréal made his comments while meeting with the media to preview the NCAA’s indoor championships. Last week, coronavirus concerns led to the cancellation of the South by Southwest festival in Austin. On Monday, Austin city officials announced that events drawing more than 2,500 people would need to be approved.

Texas called off last week’s Explore UT event, but none of the Longhorns’ athletic endeavors have been postponed or canceled yet. The Big 12, however, has implemented restrictions on media access at its upcoming men’s and women’s basketball tournaments.

The Texas Relays are scheduled for March 25-28. This will be the annual track and field meet’s 93rd year. More than 7,000 high school, collegiate and professional athletes from across the state and nation qualified for last year’s Texas Relays. Texas announced a four-day draw of 45,753 fans for that springtime showcase.

“As far as I know right now, everything is all set to go,” Floréal said. “Of course I am (concerned). … I just want to make sure everybody’s safe. I’m just not an expert. Since I’m not, then I’ve got to trust the people who are experts in making the right decision.”

Texas AD Chris Del Conte says no major changes this weekend. No change in Texas Relays yet, either. “We’re following standard protocol. And wash your hands”

Floréal’s words seem to fall in line with the thinking of his athletic department. Late last week, UT athletics director Chris Del Conte said that the Texas Relays’ schedule remained unchanged. On Monday, Texas told inquiring reporters that the university was developing its own guidelines for events but was exempt from city rules since it is a state institution.

Floréal did say that precautions are being taken with his athletes. In addition to washing hands, the Longhorns will be provided with sanitary wipes to use on things like seats. Floréal also suggested that charter flights may be safer than flying commercial. But unless he’s told otherwise, Floréal doesn’t expect the Longhorns to miss any meets.

Janae Jefferson honored by the Big 12 as No. 3 Texas loses ground on top-ranked UCLA