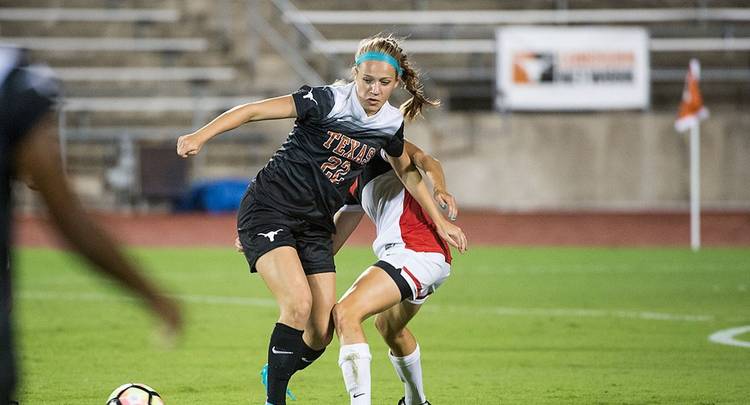 Kyra Falcone scored twice in the span of 41 seconds in a 7-0 win over Sam Houston St. on Friday, Sept. 2. (Bethany Walter/Texas Athletics Photography)

Kyra Falcone, a freshman forward for UT’s soccer team, was named freshman of the week by the Big 12 on Tuesday after her effort in a 7-0 victory over Sam Houston St. on Friday.

Falcone, a San Antonio native, scored her first two career goals in the span of 41 seconds during the first half against the Bearkats.

The Texas Longhorns held a 3-0 lead when Falcone converted goals on assists from Julia Dyche. Her goals put her in a tie for second in goal scoring for the Longhorns. Her four points through five matches has her in third place for point totals.

The Longhorns next face No. 19 Ohio St. in Columbia, Ohio on Friday at 4 p.m. The game will be televised on the Big Ten network.

Did someone see Abigail Fisher at Texas vs. Notre Dame?