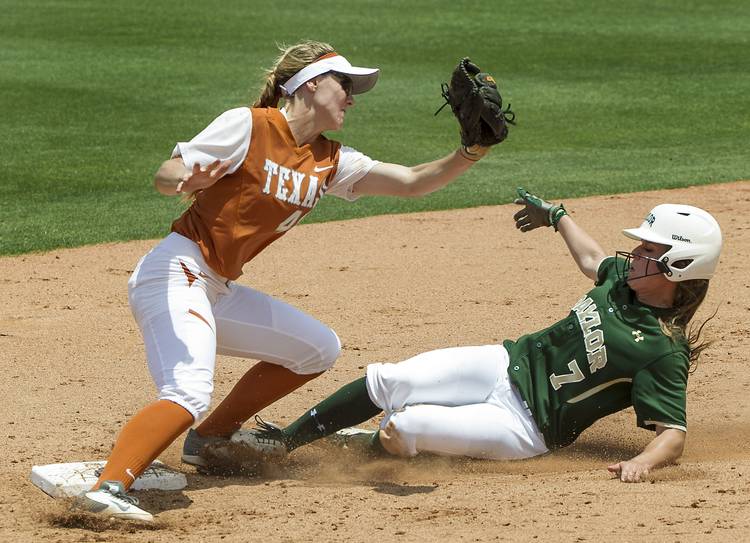 Texas' Stephanie Ceo, left, tries to make the tag on Baylor's Kaitlyn Thumann stealing second base during the third inning of action held at McCombs Field in on May 11, 2014. Ceo was selected as the Big 12 Player of the Week Tuesday. (RODOLFO GONZALEZ / AMERICAN-STATESMAN)

Stephanie Ceo hit a two-run triple and Lindsey Stephens hit a record-breaking double to lead the Texas Longhorns to a 4-2 win over Oklahoma State in the series opener at Red & Charline McCombs Field on Friday night.

Tiarra Davis (17-9)  earned the win, giving up two unearned runs on three hits in a complete game. Davis had a no-hitter going until the sixth inning before she gave up a single to Vanessa Shippy. Shippy had the only multi-hit game for either team.

Stephens’ double in the bottom of the third inning was the first hit of the game and secured her spot in the Texas Longhorn record books. Her 17th double this season broke the Longhorns’ record for doubles in a single season. It put her ahead of Taylor Thom (2013) and Nadia Taylor (2012) who were tied at the top with 16 apiece. Earlier in the game Stephens put the Longhorns up 1-0 in the first on a ground out by Davis.

Ceo hit a key two-run triple in the bottom of the fourth before Kelli Hanzel added an RBI single to put the Longhorns up 4-0.

Kacy Freeze took the loss for Oklahoma State as she gave up four runs on five hits through six innings.

The Cowgirls nearly staged a rally in the top of the seventh, but after scoring two runs they fell short when Hanzel fielded a bouncer from Taylor Lynch and got the out at first base unassisted.