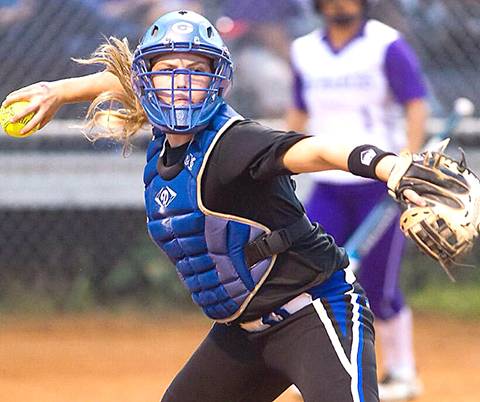 Taylor Ellsworth, of Georgetown, is skipping her senior season with the Eagles and will begin her college career with Texas. She was one of two mid-term enrollees. CREDIT: Photo courtesy of Texas athletics

Georgetown High School catcher Taylor Ellsworth will skip her senior season with the Eagle and begin her college career at Texas this spring.

Ellsworth was one of two mid-term enrollees for the Longhorns that are immediately eligible to play this season. The other is Brooke Bolinger, a left-handed pitcher that transferred from the University of Nevada.

Both practiced with the team on the first day of practice Wednesday.

Ellsworth was a three-year standout at Georgetown High School where she had a career batting average of .550 with 21 home runs and 107 RBIs. She played club softball for Austin’s Texas Blaze. She was a two-time all-state player.

Bolinger, who’s from Yucaipa, Calif., posted a 16-6 record with a 2.81 earned run average, 18 complete games and 118 strikeouts during her freshman season at Nevada.