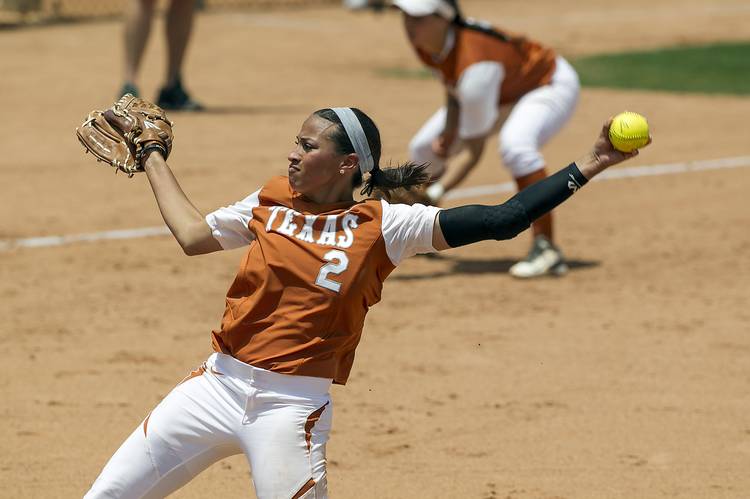 Texas' Tiarra Davis (2) is one of 10 upperclassmen returning for the Longhorns in 2017. (Rodolfo Gonzalez/ American-Statesman)

The Longhorns scored in the sixth inning to tie the game after trailing by a run, but that was the only run they could score. Tiarra Davis singled to left field and an error allowed Bekah Alcozer to reach home plate from second.

Randi Rupp (16-5) picked up the win for the Bobcats, allowing one unearned run on five hits through nine innings. She struck out seven and walked just two in her 140-pitch outing.

Paige von Sprecken (5-3) took the loss as she gave up the winning hit in relief. She allowed one run on three hits through 2 2/3 innings.

Texas used five pitchers for the midweek contest with Davis getting the start. She allowed no runs on no hits through one inning.

Kristen Clark gave up the Bobcats’ first run in the bottom of the third when Christiana McDowell drove home Carter with an RBI single to right field. Clark gave up two hits and struck out one batter in her one inning of work.

Despite four errors the Bobcats were able to hold Texas off for the win.

Tuesday DerMargosian was the only Longhorn to have more than one hit in the game. She was 2 for 4 while Taylor Ellsworth, Davis and Kaitlyn Slack were the other Longhorns to get hits.

The Texas softball team will get back to Big 12 competition beginning Friday at 4:30 p.m. as they take on No. 11 Oklahoma.

What are the odds Texas wins the 2018 NCAA Tournament? Vegas has them