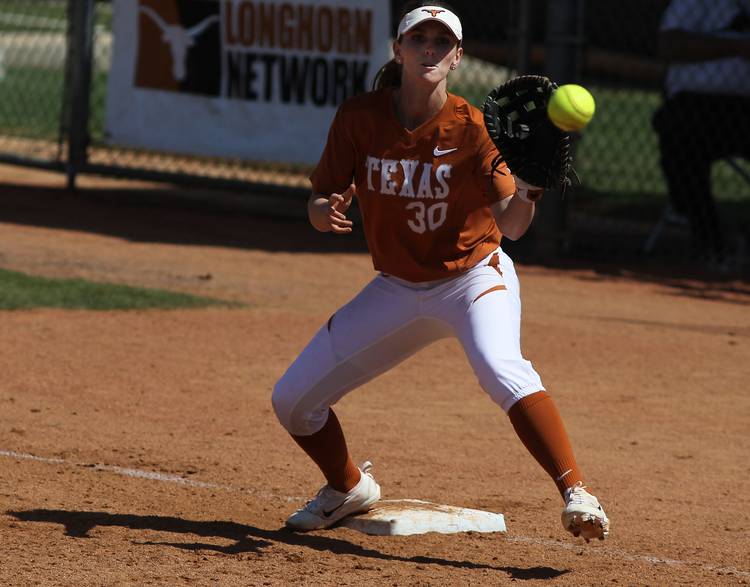 Texas' Kelli Hanzel (30) makes the catch for the Houston out at first during a NCAA softball game at McCombs Field, Sunday, April. 2, 2017. (Stephen Spillman / for AMERICAN-STATESMAN)

The Longhorns softball team had 13 hits on their way to defeating Texas Tech 9-5 in Lubbock to pick up their second Big 12 win in a row Friday afternoon.

Kelli Hanzel was 2 for 4 with two runs scored, a home run and three RBIs to lead the Longhorns’ offense.

Devon Tunning went 3 for 4 with two doubles and three runs scored, while Randel Leahy was 3 for 4 with a double, a triple and two RBIs.

Tiarra Davis (5-8) picked up the win, allowing four runs on six hits through five innings. She struck out seven and walked three. Davis also had an RBI.

Texas (22-18, 2-6 Big 12) jumped out to an early lead in the first when Taylor Ellsworth hit a sacrifice fly that scored Tunning.

Hanzel added a run in the second with her solo homer.

After Texas Tech (17-22, 4-7) tied the game in the bottom of the second on a two-run homer by Brittany Warnecke, Texas plated four runs in the top of the third. Hanzel hit a two-run single and Ellsworth scored on an error before Leahy doubled to score Hanzel.

The Red Raiders scored a run in each of the fourth and fifth innings, but Leahy’s RBI triple in the sixth added some cushion for the Longhorns.

Texas will try to complete the sweep against Texas Tech on Saturday with first pitch scheduled for noon.