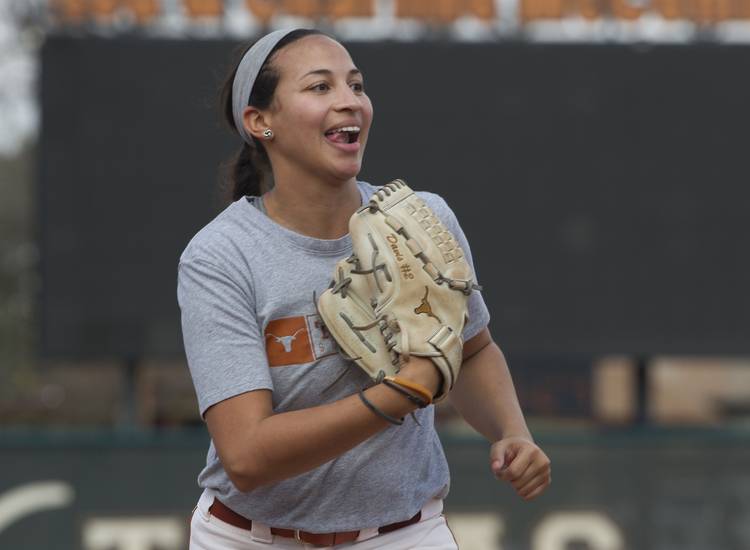 Texas' Tiarra Davis watches for her throw to be caught at home during the second day of practice for the 2017 season at McCombs Field Thursday, Jan. 12, 2017. (Stephen Spillman / for AMERICAN-STATESMAN)

Devon Tunning and Celina Felix each doubled and combined to drive in three runs as the Texas softball team tied the series with Baylor, winning 3-1 on Saturday afternoon at McCombs Field.

Tunning was 2 for 3 with a run scored and an RBI while Felix went 1 for 3 with two RBIs from the plate. Both drove in runs in the bottom of the fifth to take the lead for good.

“A lot of quality things happened last night in Waco, but we didn’t get the outcome, and again there was that one-run loss,” head coach Connie Clark said. “I love the momentum coming off today and heading into the rubber match tomorrow.”

Tiarra Davis (8-8) pitched a complete game, allowing one run on five hits while striking out five to pick up the win.

Gia Rodoni (14-2) took the rare loss as she allowed three runs on six hits through 4 2/3 innings.

Baylor went up 1-0 in the top of the fifth when Taylor Ellis drove in Lindsey Cargill.

Texas answered in the bottom half of the inning as Tunning’s RBI single plated Jade Gortarez to tie the game.

Felix’s RBI double later in the inning proved to be the game-winner.

Kaitlyn Washington and Gortarez each went 1 for 3 with a run scored.

Texas will go for the series win on Sunday at 1 p.m. at McCombs Field.

WATCH: Kevin Durant scores 38 and does the Jordan shrug