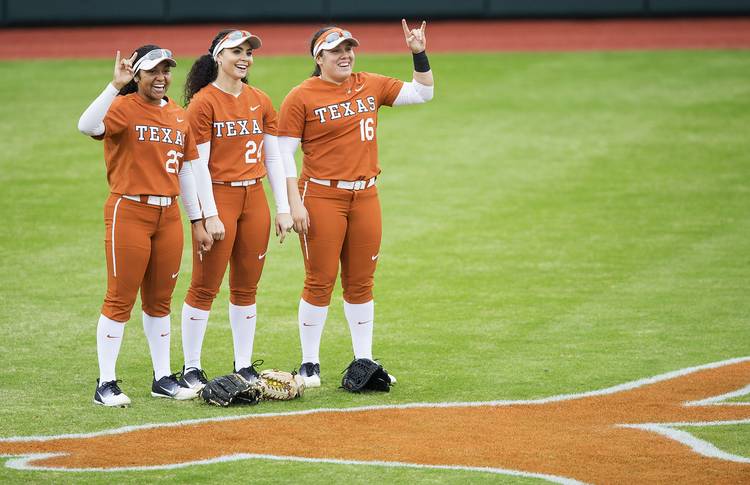 The Texas softball team split two games to open the Texas Invitational, defeating No. 20 Michigan 3-0 before falling to Wichita State 7-5 at McCombs Field on Friday night.

After scoring four runs in the second inning, the Longhorns (5-6) appeared to be on their way to a sweep on Friday. Wichita State (6-5) had other plans, scoring in three straight innings to take the lead in UT’s second game of the day.

Bailey Klitzke picked up the win, allowing no earned runs on one hit in 4 2/3 innings. Erica Wright took the loss for Texas, giving up five runs on five hits in 3 2/3 innings.

That’s when the Shockers heated up. A two-run double by Derrico cut the Texas lead in half.

The Longhorns added another run in the third, an RBI double by Tedder that scored Paige von Sprecken. Von Sprecken finished 1-for-3 with a run scored and a double. Only Tuesday DerMargosian had more than one hit for Texas. She went 2-for-3 with w run scored.

Buck tied the game with a three-run double in the fourth, but Wichita State wasn’t done. In the fifth they added two more runs to take the lead for good. Asea Webber hit an RBI single that scored Madison Perrigan before Palmer singled home another run.

The Longhorns’ last opportunity to get back in the game ended when Kaitlyn Washington fouled out and von Sprecken was doubled up.

Earlier in the day, a three-run third inning was enough to lift the Longhorns over the Wolverines (6-5).

Brooke Bolinger(2-1) got the start for Texas, allowing no runs on five hits in her first career complete-game shutout. She struck out seven and gave up just two walks in the win.

A two-out, three-run home run by Taylor Ellsworth gave Texas all the offense they needed to secure the victory. She finished 2-for-2 with a run scored and three RBIs.

Jefferson and Malory Schattle each had a hit and scored a run for the Longhorns.

With the bases loaded for Michigan in the fifth inning, Bolinger struck out Aidan Falk to end the threat and preserve the three-run lead.