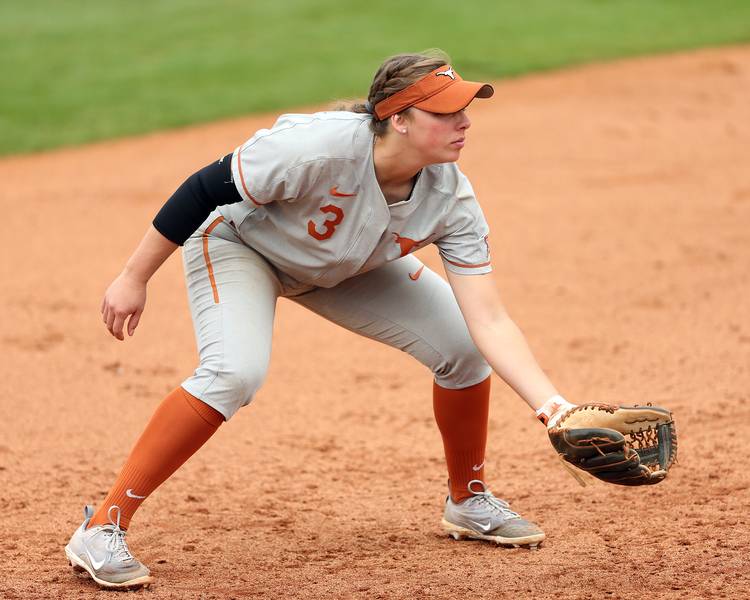 University of Texas Kaitlyn Slack stands ready for the play against Oklahoma State at McCombs Field on Sunday, March 25, 2018. JAMIE HARMS / FOR AMERICAN-STATESMAN

The Texas softball team couldn’t score as they were shut out, 6-0, in the series opener against No. 3 Oklahoma in Norman, Okla. on Friday.

Paige Parker improved to 22-2 as she pitched the shutout, allowing five hits while striking out eight and allowing no walks.

Brooke Bolinger suffered the loss as she gave up six runs on six hits, including two homers, while striking out four.

Shay Knighten went 2-for-3 with a run scored and four RBIs to lead the Sooners (42-3). She hit a grand slam in the fifth inning to put the game virtually out of reach with Parker dealing.

“It’s about executing, and it doesn’t matter who’s on the other side,” UT head coach Connie Clark said. “You have to execute, and I think that’s about us and continues to be about us. We had a couple of big opportunities early, and we needed to strike. We’ve got to come back to work tomorrow.”

Jocelyn Alo got the Sooners on the scoreboard early, hitting a solo home run in the first.

Nicole Mendes capped the scoring with an RBI single to score Lea Wodach in the sixth inning.

Janae Jefferson and Paige von Sprecken each went 2-for-3 for Texas (28-19). Kaitlyn Slack had the only other hit for the Longhorns.

The teams continue the series on Saturday at 1 p.m.