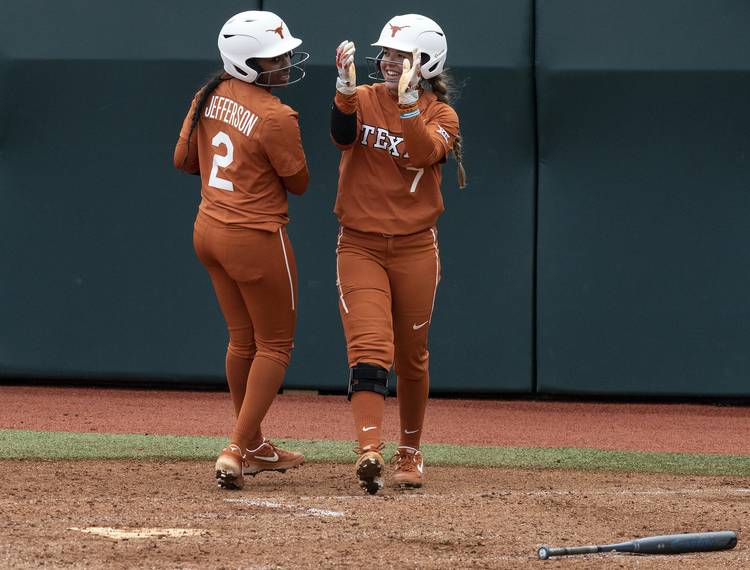 A pair of home runs by Reagan Hathaway and Mary Iakopo and a triple by Ki’Audra Hayter powered the Longhorns softball team to a six-run fifth inning and an 8-0 run-rule win over Houston Baptist at McCombs Field on Wednesday.

The win is the seventh straight for the No. 9 Longhorns (13-1) and the seventh on the season via the run rule.

Hathaway’s solo shot in the fifth inning was her first homer of the year. Iakopo’s second homer of the season made it 5-0 later in the inning. She’s reached base safely in all 13 games she’s played as a Longhorn.

With this HR, @maryiakopo has now reached safely in ALL 13 GAMES played in her Texas career! pic.twitter.com/JQvfTp9Rei

After a pair of walks, Hayter hit a two-run triple to make it 7-0.

Mallory Schattle ended the game with a single that brought Hayter home.

The Longhorns plated a run in each of the first two innings and the pitching staff did the rest.

Ariana Adams and Brooke Bolinger combined for the shutout. Adams (2-0) earned the win while Bolinger picked up her second save.

Hathaway led off the first inning with a double to get the Longhorns’ offense going early. After Janae Jefferson bunted Hathaway over to third base, Shannon Rhodes hit a sacrifice fly that brought her home to make it 1-0 for Texas.

In the next inning Miranda Elish reached base on an error to set up a double by Lauren Burke. Elish got to third base on Burke’s hit and scored later on a fielder’s choice.

The Longhorns softball team next travels to Tempe, Ariz. for the Sun Devil Classic. Texas takes on Wisconsin at 1 p.m. before facing Arizona State at 6 p.m. Friday.