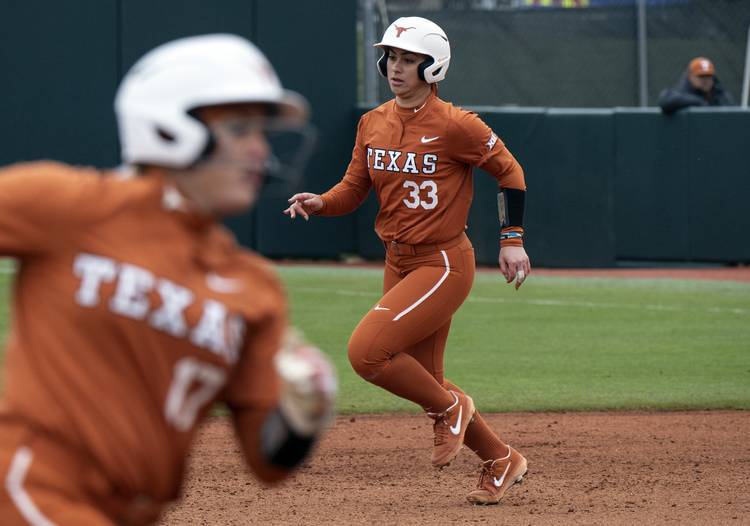 The Texas Longhorns softball team split a pair of games to open the Longhorn Invitational at McCombs Field on Friday.

Texas took an 8-0, run-rule win over Texas Southern before falling to Minnesota 4-1 in its second game.

A three-run seventh inning by the Gophers (13-6) was enough to halt a three-game winning streak for Texas (19-4).

Sydney Smith picked up the win, allowing no runs on just two hits in four innings.

Miranda Elish (5-2) was hit with her second loss of the year as she allowed four runs, three unearned, on seven hits through seven innings. She struck out 12 and issued five walks.

Natalie DenHartog went 1-for-4 with a double and two RBIs to lead the Minnesota offense. Hope Brandner and Katelyn Kemetmueller each drove in a run for the Gophers.

Texas struggled at the plate, though each of its hits went for extra bases. Reagan Hathaway, Shannon Rhodes and Elish each hit a double to account for the Longhorns’ three hits.

Brandner gave Minnesota a 1-0 lead in the first inning when she singled to drive home Ellee Jensen. Neither team scored again until the seventh inning.

The Gophers added two more runs on a double by DenHartog in the top of the seventh. Kemetmueller’s RBI single capped the scoring for Minnesota after that.

Texas’ only run came on a wild pitch with Elish on third base in the bottom of the seventh. Amber Fiser struck out Kaitlyn Slack to end the game.

Earlier in the day, a wild pitch and a pair of RBI doubles set the Longhorns up nicely to take another run-rule win in the Longhorn Invitational opener.

Hathaway had an RBI single to score Slack in the third before Tuesday DerMargosian scored on a Slack single in the fifth.

Burke sealed the win with an RBI single to score MK Tedder later in the inning.

Texas next takes on Texas Southern at noon before facing Minnesota at 2:30 p.m. Saturday. The Longhorn Invitational concludes Sunday when Texas faces Minnesota once more at noon.