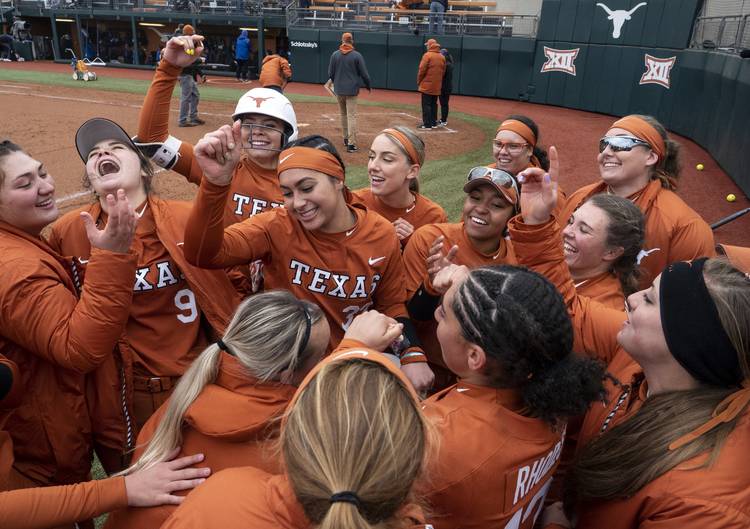 The Texas softball team took two wins Saturday to bounce back from a late loss Friday, topping Texas Southern 6-2 and Minnesota 5-3 on the second day of the Longhorn Invitational at McCombs Field.

In the first win, Shealyn O’Leary continued to make UT history. In the second victory, Texas avenged a 4-1 loss to Minnesota the day before.

Miranda Elish went 2-for-3 with a double and two RBIs in the win over the Gophers. Lauren Burke scored two runs and hit a triple. Ki’Audra Hayter stole a base and scored an insurance run as a pinch runner.

Texas trailed 1-0 before a three-run fourth inning put them in the driver’s seat. After a single by Shannon Rhodes and a walk by Mary Iakopo, an error allowed two runs to score for Texas. Elish then hit an RBI double to make it 3-1. She followed that up with another RBI in the bottom of the sixth.

In addition to the offense, a pair of double plays proved to be crucial. Starting pitcher Brooke Bolinger found trouble in the first inning when she gave up two straight singles. The next batter hit into a 1-5-3 double play to get two outs with a runner on second, however. Bolinger fielded the ball and fired to third to get the first out before the throw to first completed the play. Bolinger earned the win, allowing one run on eight hits through four innings.

Another double play in the final inning turned out to be huge. The Horns led 5-1 in the top of the seventh when Janae Jefferson fielded a ball, touched second and threw to first to get two outs. That play preceded a two-run home run by Minnesota later in the inning, making it 5-3.

A line out ended the game, earning Ariana Adams her first save of the season.

Earlier, the Longhorns topped Texas Southern for the second time during the weekend. O’Leary continued her red-hot start, picking up her seventh win and making history as the first Texas freshman to start her career 7-0. She allowed two runs on four hits and struck out six through seven innings.

Texas scored in all but one inning. Iakopo singled to drive home Hathaway in the first before Parker and DerMargosian drove in a run apiece in the second.

Texas Southern didn’t get on the scoreboard until an error and an RBI single put up two runs in the seventh.

The Texas softball team closes out action at the Longhorn Invitational with a game against Minnesota at noon Sunday.