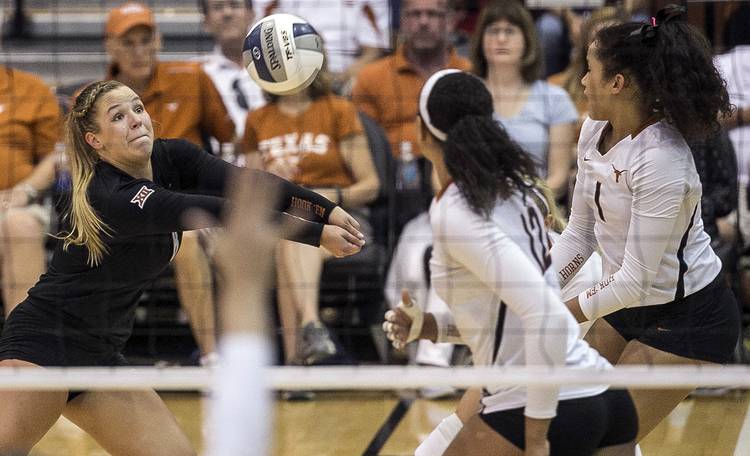 Texas' Cat McCoy (8) makes a pass on the ball as Morgan Johnson (12) and (1) Micaya White (1) look on Sunday at Gregory Gym. The Longhorns lost to Wisconsin in 5 sets. It was Texas' first home loss in 21 matches. (Rodolfo Gonzalez/American-Statesman)

Orie Agbaji had a career-high nine blocks to lead the Longhorns. The freshman also had three kills for Texas.

Nicole Dalton had 41 assists to go along with five kills, nine digs and three blocks.

The Texas defense came up big, producing 17 blocks while Cat McCoy led the team in digs with 15.

The Longhorns bounced back after falling to No. 6 Wisconsin on Sunday, though they were playing without starting setter Chloe Collins, who was sidelined with an illness. Dalton started in her place.

The Longhorns dropped the first set after saving three set points, but went on to win the next three sets for the win. Winning the second set which also went to extra points righted the ship for Texas.

West Virginia was led by Payton Caffrey who had 26 kills and nine digs.

Texas returns to action on Saturday as they host No. 8 Kansas at 7 p.m. at Gregory Gym. The match can be seen on Longhorn Network.

Longhorns in the NFL: Week 2