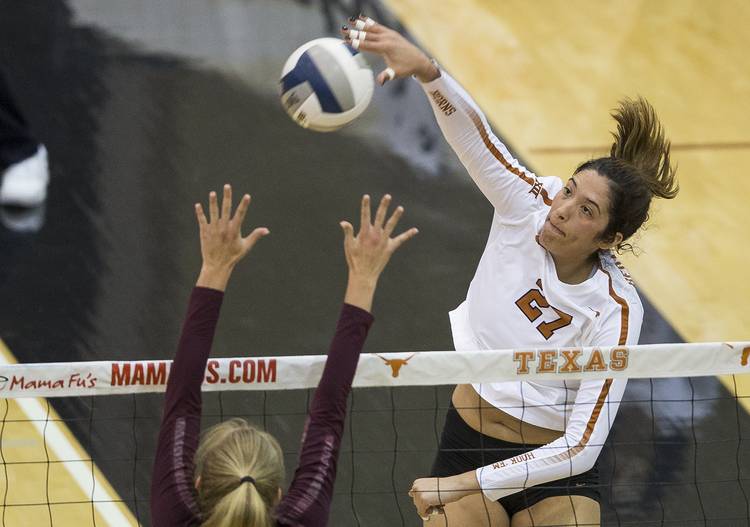 Texas outside hitter Yaasmeen Bedart-Ghani (27) spikes the ball during a scrimmage against Texas A&M on April 4, 2018. NICK WAGNER / AMERICAN-STATESMAN

The Aggies and Longhorns battled back-and-forth before Texas won two straight sets to defeat Texas A&M 25-15, 18-25, 25-16, 25-23 in a spring volleyball contest at Gregory Gym on Wednesday.

Micaya White led Texas with 10 kills. She recorded a double-double by adding 16 digs, which also led Texas. Yaasmeen Bedart-Ghani was second on the team with nine kills.

Despite a decided advantage in hitting percentage, .301 to .075, the Longhorns weren’t able to sweep the Aggies.

Texas opened strong with a 25-15 win in the first set.

Texas A&M won the second set 25-18, however. Hollann Hans led all players with 15 kills for the Aggies.

After the match was tied at a set apiece, Texas regained control with a 25-16 win.

The fourth set was a back-and-forth affair with 10 ties. After the score was 23-all, the Longhorns got back-to-back points from Butler and Shook to take the win.

Breakfast with Bevo: It’s never too early for Texas volleyball