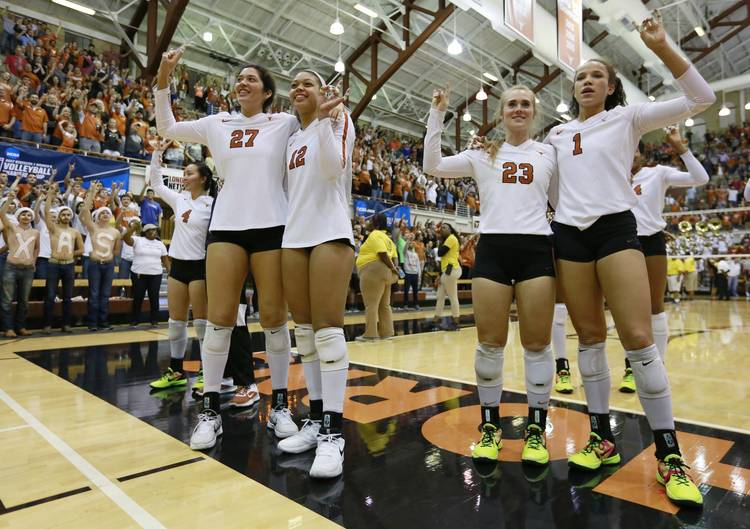 Ahead of the 2018 volleyball season, the Big 12 is once again predicting that some of its top standouts will play at Texas.

The coaches in the conference also expect Logan Eggleston to be the Big 12’s top freshman.

For the third time in #Big12VB history, a team sweeps the preseason awards. 🤘

The 6-1 White has led Texas in kills during each of the past two seasons. The Frisco native has averaged 3.8 kills and 2.4 digs per set in her career. White is a two-time AVCA All-American, and she joins Baylor’s Yossiana Pressley and Iowa State’s Jess Schaben as the only unanimous selections to the Big 12’s preseason honor roll.

Read more: Morgan Johnson’s play at the net has been music to Texas’ ears

Johnson is coming off a season in which her 1.14 blocks per set ranked seventh in the conference. Bedart-Ghani made only five starts in 2017, but the team captain has had shining moments in each of the last three NCAA tournaments. Eggleston, who recently led the U.S. Women’s Junior National Team to a title at the NORCECA Continental Championship, is enrolling at Texas after skipping her senior year of high school.

Texas is set to open its season at the Nebraska-hosted VERT Challenge on Aug. 24.

On Second Thought Ep 103: A look back on the success and failure of Texas athletics for 2017-18