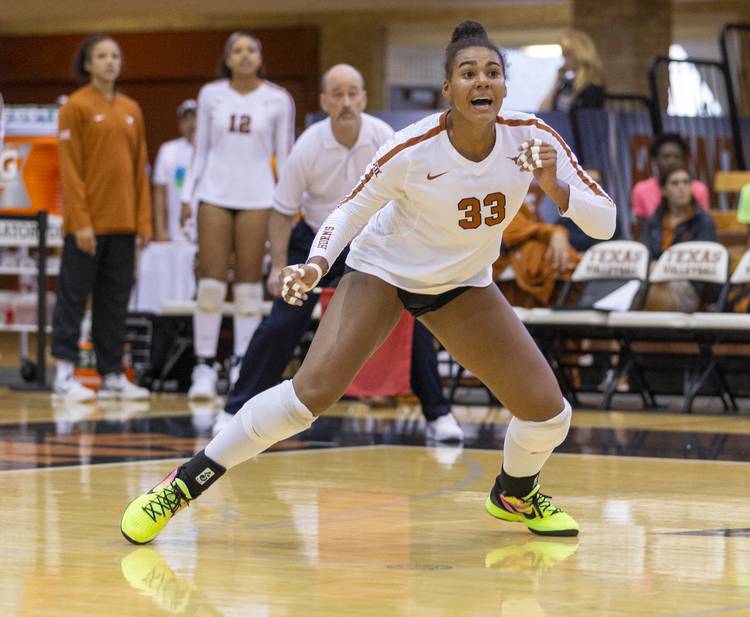 Texas' Logan Eggleston (33) calls out to teammates during an intrasquad scrimmage at Gregory Gym, Saturday, Aug. 18, 2018. (Stephen Spillman / for American-Statesman)

The No. 2 Longhorns volleyball team suffered its first setback Saturday night, falling to No. 8 Wisconsin in four games. The Badgers triumphed 25-21, 25-22, 23-25, 25-12 at the HotelRED Invitational in Madison, Wis.

Freshman Logan Eggleston and Micaya White tied for the team lead with 16 kills, but it wasn’t enough to pull off a win.

Wisconsin had three players with double-digit kills, led by Grace Loberg who had 19. Loberg logged a double-double as she led the team in digs as well with 18.

Molly Haggerty also had a double-double, recording 16 kills and 15 digs for the Badgers.

Sydney Petersen led Texas with 14 digs and White chipped in 11 to record a double-double.

Ashley Shook set up 45 points for the Longhorns. She added five digs and two blocks.

The Badgers controlled the deciding set to cruise to the win.

The Longhorns volleyball team next takes on High Point Sunday at 1 p.m. to conclude play at the invitational. High Point is the first unranked opponent Texas will face this season.

Longhorns in the NFL: Seven Rookies Make the Cut