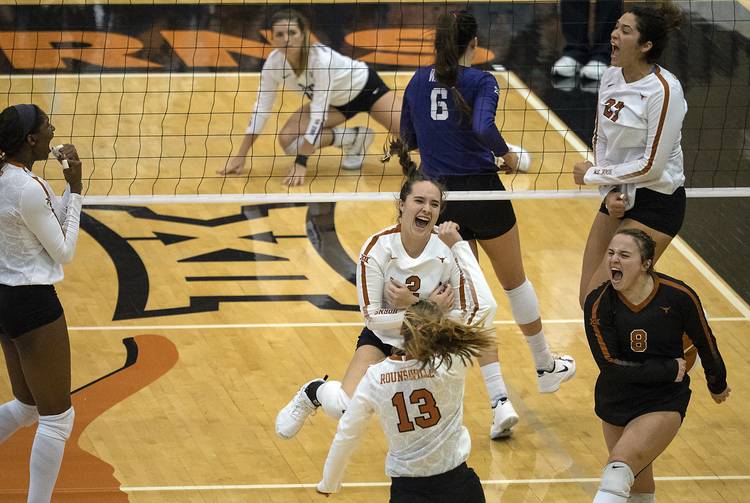 Texas moves to 17-4 overall and 12-1 in the Big 12 with three conference games remaining. Both Kansas and Baylor, Texas’ next opponent, are 8-4 in conference.

Yaazie Bedart-Ghani led the Longhorns with 13 kills while Micaya White and Logan Eggleston each hit double digits in the category. White made 12 kills and Eggleston chipped in 10. White also led Texas with 11 digs for her eighth double-double of the season.

Jada Burse of Kansas led all players with 19 kills while Zoe Hill added 14 for the Jayhawks.

Jhenna Gabriel had 45 assists, a career high for the freshman, leading the Longhorns in the category for the second straight game.

Morgan Johnson had three blocks on the day, but Kansas led Texas in that team category, 10-5. Rachel Langs and Mmachi Nwoke each had five blocks for the Jayhawks.

Kansas led the Longhorns in many team categories, kills, blocks, assists and digs. But Texas held the edge in two key spots. They had seven aces to Kansas’ one and outhit the Jayhawks .363. to .248.

The Longhorns volleyball team takes on Baylor Friday at 6 p.m. on the road.