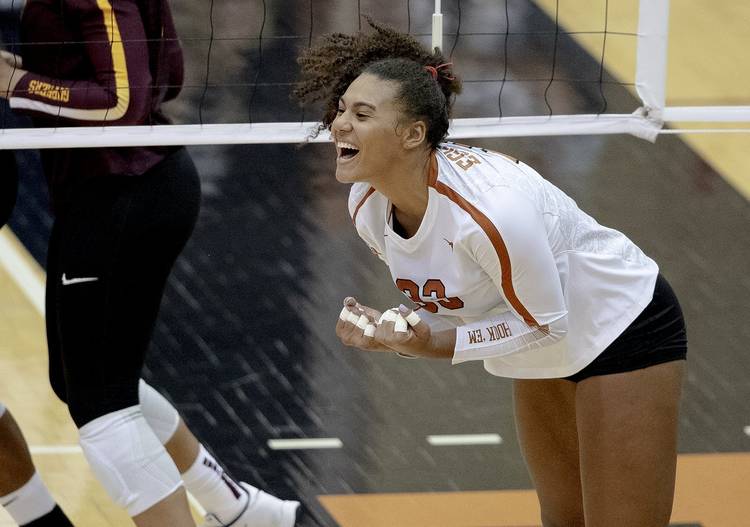 Texas outside hitter Logan Eggleston (33) celebrates a point against Minnesota on Sept. 4, 2019, in Austin. [NICK WAGNER/AMERICAN-STATESMAN]

For the second game in a row Logan Eggleston led the Longhorns volleyball team in kills as Texas defeated Wichita St. 25-13, 25-9, 25-15 at the Shocker Classic in Wichita, Kan. on Saturday.

Eggleston finished with 14 kills and had a hitting percentage of .478. Micaya White hit .565 on the way to putting away 13 kills. White earned the title of Most Outstanding Player for the tournament after recording 34 kills, six blocks and 23 digs in two matches.

Skyler FIelds and Asjia O’Neal each had seven kills. Fields led the Longhorns with four blocks as well.

Jhenna Gabriel led Texas with 39 assists while Sydney Petersen had 20 digs to lead the Longhorns.

The Longhorns dominated the second game as well, taking an early 12-3 lead. They finished the set with seven consecutive points.

The third game was the most competitive, though Texas started with an 8-0 run. Wichita St. closed the gap to 14-8, eventually falling by 10 points.

The Longhorns next face Rice on Wednesday on the road at 6:30 p.m.

Texas is controlling, well, just about everything; Horns lead Rice at halftime, 31-0