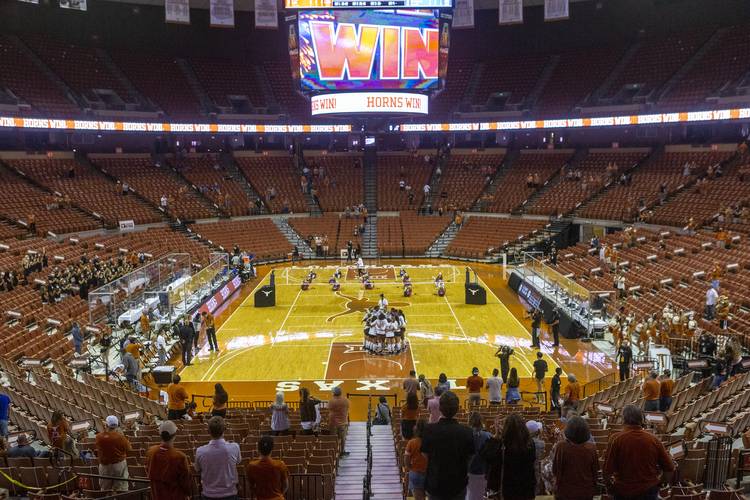 Texas volleyball players huddle together following a 3-0 win over Kansas at the Erwin Center on Oct. 1, 2020. The Longhorns remained huddled through the playing of the Eyes of Texas. [Stephen Spillman for Statesman]

Following their sweep of Kansas on Thursday night, members of the Texas volleyball team gathered to protest the playing of “The Eyes of Texas.”

As the song played at the Erwin Center, Longhorns players huddled together but did not acknowledge the song. In years past, players would congregate in small groups after matches and take part in the school song with fans.

The Eyes, however, have come under recent scrutiny. The song has been a favored tradition for UT fans for decades, but its history has ties to minstrel shows and a saying by Robert E. Lee.

This summer, several volleyball players joined an athlete-led protest that aimed to address racial issues at the university. The protest included a list of demands, one of which was the retirement of “The Eyes of Texas.” Texas administrators eventually declined to ditch the song, but did tell the athletes that they no longer had to sing along.

The Longhorns also wore Black Lives Matter T-shirts during warm-ups Thursday night and had “We Are One” patches sewn onto their jerseys. Before the match, the Black Lives Matter video that the team produced this summer was shown on the overhead scoreboard.

After sweeping Kansas, @TexasVolleyball huddled on the court during the 'Eyes of Texas'.

Logan Eggleston explained to LHN, "We wanted to stay on the court just to show that we do respect our school and we love being here at Texas, but we're not super supportive of the song." pic.twitter.com/ac1lIRo1hI

A week ago, Texas coach Jerritt Elliott said the team was still discussing how it would handle “The Eyes of Texas.” In their post-game press conference, juniors Logan Eggleston and Jhenna Gabriel addressed how the team addressed it:

We’ve had a lot of discussion as the team about a lot of different things regarding race over the summer. One of the things is ‘The Eyes of Texas’ just because of the history of it, it was performed in minstrel shows with blackface and came from a quote that’s just not super inclusive to Black individuals. So we just don’t feel super comfortable singing it, like personally as a Black athlete, and my teammates support me in that and they kind of felt the same way. So we wanted to show unity by being together as a team in a big huddle, and I think we really did that. I’m just happy that our team is so inclusive and so loving of each other. It was nice just to be together with my team and them just be so understanding.”

Obviously we mean no disrespect to our school. We love representing Texas, we love everything about it. We’ve just had a lot of conversations about ‘The Eyes of Texas’ and where we all stood on it and came to a team decision. We chose to stay out there and to just hold each other and show each other that we’re supporting each other. Nobody on the team feels very comfortable singing it knowing what it stands for. After all the conversations that we’ve had as a team, that’s kind of what we chose to do. Kind of tried to make our statement and to show everybody what we think of it.”