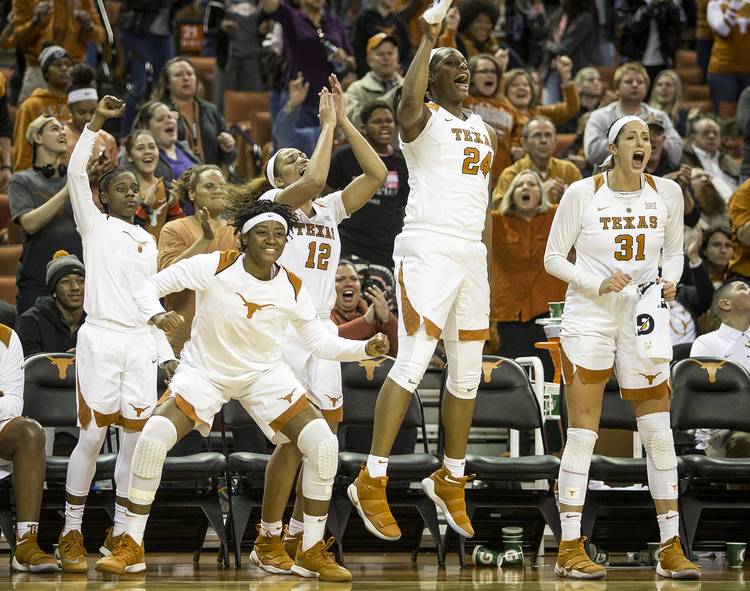 LAWRENCE, Kan. (AP) — Texas played a great beginning and end against Kansas on Wednesday night. It was the middle that was missing, including an eight-minute scoreless stretch.

Still, the Longhorns found their groove in time to cruise to another Big 12 victory.

Ariel Atkins had 16 points, Brooke McCarty added 13 and No. 8 Texas pulled away late in a 55-41 victory over Kansas.

The Longhorns (17-4, 8-2) have struggled with consistency this season, and it really showed in the middle of the game.

“Attention to detail kind of comes and goes with this team,” coach Karen Aston said. “And that’s kind of what we looked like tonight.”

Joyner Holmes had 10 points and seven rebounds, which tied for the lead with both Atkins and Khaléann Caron-Goudreau.

Christalah Lyons led Kansas (11-11, 2-9) with 18 points and nine rebounds, one of few bright spots in a mostly poor offense performance. Lyons had 15 of those points in the first half.

“It’s hard to ride her offensively for 40 minutes,” coach Brandon Schneider said. “I thought she got a little tired, and they really did a good job of hedging on her.”

Kansas‘ second-leading scorer, Kylee Kopatich, was held to two points on 1-of-5 shooting and had four fouls.

“She’s a good basketball player, she’s gonna get the looks that she wants,” Atkins said. “It’s just a matter of trying to make it more difficult for her.”

Neither team shot the ball well, as Texas finished with a 36.2 field goal percentage and Kansas with a 31.3 clip. The Jayhawks also missed eight free throws.

Texas entered as the country’s second-best team in terms of rebounding margin (plus-12.7) and beat Kansas on the boards 41-33.

When the two faced off earlier this year, the Longhorns racked up 26 offensive rebounds. The Jayhawks vastly improved in that department the second time around, trimming that number to 10.

Kansas logged 20 turnovers, eight more than Texas. In the fourth quarter alone, the Jayhawks turned it over seven times to the Longhorns‘ zero.

Schneider sees this as both a mental lapse in his team, and a result of the strength of its opponent.

“We over-dribbled it too much and didn’t make decisions on the first or second bounce and just hit the open man,” Schneider said. “But they’re capable of doing that because their athleticism is elite.”

The Longhorns have won 12 consecutive meetings with the Jayhawks and have swept the season series for a fifth straight year. The Longhorns lead the all-time series 25-10.

Texas is second in the conference behind undefeated No. 3 Baylor.

Kansas slides to 2-9 in the conference, good for second to last place.

Texas returns home to take on TCU on Saturday, looking to gain extra separation from the team one game behind them in the standings.

Kansas has another tough test Saturday as it travels to Oklahoma State to face the No. 23 Cowboys.