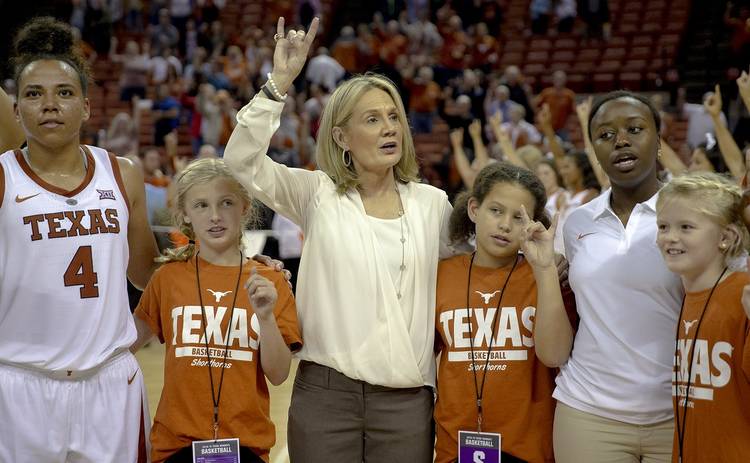 Texas head coach Karen Aston sings along to The Eyes of Texas after an NCAA women's basketball game in Austin, Texas, on Thursday, Nov. 8, 2018. [NICK WAGNER/AMERICAN-STATESMAN]

ESTERO, Fla. (AP)—The No. 10 Texas women’s basketball team rode defense to a berth in the championship game of the Gulf Coast Showcase.

Jatarie White scored 16 points and Texas defeated Michigan 69-52 on Saturday night in the semifinals. They set the tone with a 19-0 run in the first quarter.

Texas led 39-14 at the half, and held a double-digit lead for the game’s final 34 minutes.

“I definitely think we came out of the gates ready to play,” Longhorns coach Karen Aston said. “You don’t ever know how a team is going to respond to adversity…but I thought we gave great effort.”

Michigan (4-1) will meet Washington for third place in the eight-team event. Deja Church scored 12 points for the Wolverines, and Amy Dilk added 10.

Michigan shot 17 percent in the first half and 29 percent for the game.

“I think their physicality surprised us at first,” Michigan coach Kim Barnes Arico said. “We tried to go inside and they were really physical … and we weren’t used to that.”

Texas moved Warren into the starting lineup in the place of Lashann Higgs, who left Friday’s 56-55 win over Quinnipiac in the first half with a knee injury. Warren, the hero of Friday’s victory after hitting what became the game-winning jumper with just under a minute left, stayed hot Saturday, making six of her nine shots.

“Lashann being the player she is, that’s a tough spot to fill,” Warren said. “So the guards as a group, we just knew we had to pick that up.”

Michigan missed 23 of 24 shots in one first-half stretch, including 16 straight over a six-minute stretch of the first quarter. The deficit got to 50-24 midway through the third quarter before the Wolverines went on a small run, peeling off nine straight points to get a bit of momentum.

“If we want to be at this level, this is how we need to be able to compete,” Barnes Arico said. “That was their challenge in the second half.”

Kayla Robbins’ layup with 7:42 left got Michigan within 54-41, but the comeback bid essentially ended there. Warren connected on a 3-pointer, Sutton added a three-point play on the next possession and Texas’ lead was back to 19.

The Longhorns are 5-0 for the fifth time in seven seasons under Aston. They’ve also won nine consecutive games played in Florida, with the last Texas loss in the Sunshine State coming 17 seasons ago.