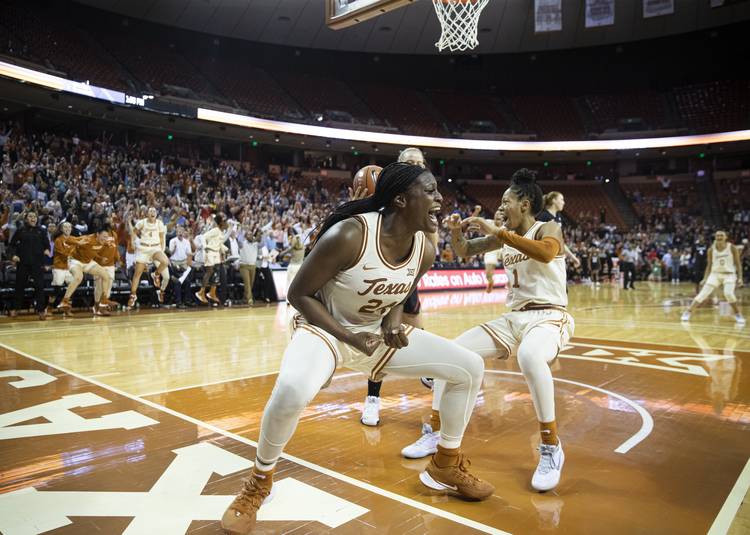 Texas forward Joyner Holmes exults after scoring the last points in a 69-64 win over No. 1 Stanford at the Erwin Center. [RICARDO B. BRAZZIELL/AMERICAN-STATESMAN]

Iowa State’s Kristin Scott led all scorers with 24 points while Ashley Joens scored 18 for the Cyclones.

The Cyclones started the game on an 11-0 run before Texas got back in the game.

The Longhorns trailed by three points after the first period, but a strong 21-12 advantage in the second quarter led them to a six-point lead by halftime.

After the break, the Longhorns built the lead to 17 points in the third quarter. Texas outscored the Cyclones by 10 points in the period.

Texas shot 49% while holding the Cyclones to 47%. The Longhorns hit half of their 3-pointers, going 8 of 16, while Iowa State struggled to make 8 of its 25 shots from beyond the arc.

The Cyclones tried to get back in the game with a 7-0 run in the final period, aided by turnovers by Texas. Despite the five turnovers in the fourth period, the Longhorns had their fewest turnovers in a game since 2013 with six total.

The Longhorns hit their free throws in the end, holding off Iowa State.

Cory Redding to be enshrined at Cotton Bowl Hall of Fame