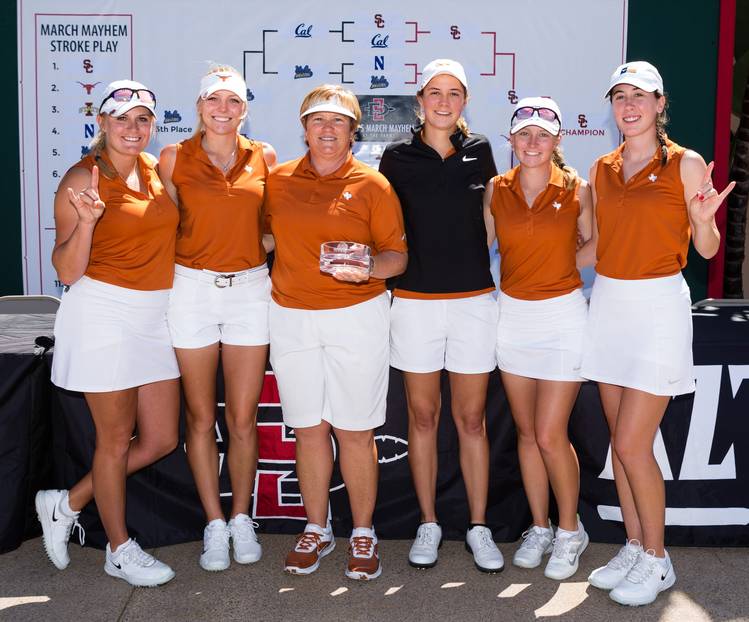 Emilee Hoffman shot 141 over two rounds on Friday to lead the Texas women’s golf team to first place at the Big 12 Championships in Dallas.

The Longhorns lead Baylor by one stroke after shooting 587, 11 over par through two rounds. The Bears led by seven strokes over the field before Texas surged in the second round.

After shooting 71 in the first round, Hoffman fired a 70 to sit at 3 under par with one round remaining to be played on Sunday. She made birdie and eagle on her final two holes of the day to lift UT to the lead.

The teams played two rounds on Friday due to expected bad weather on Saturday. The tournament concludes with one round on Sunday.

Sophia Schubert sits tied for third after shooting 145 through two rounds. She followed her first-round 75 with a 70 to move up the leadearboard.

Freshman Kaitlyn Papp is in a tie for ninth after shooting 74 in each of the first two rounds. She sits at 4-over, 148.

Celia Barquin Arozamena of Iowa State is in second place on the individual leaderboard. She’s even at 144.

Oklahoma State sits in third place in the team standings after shooting 589 through two rounds.

The Texas women’s golf team is attempting to become the first team to win back-to-back conference titles since Oklahoma State did so in 2009.