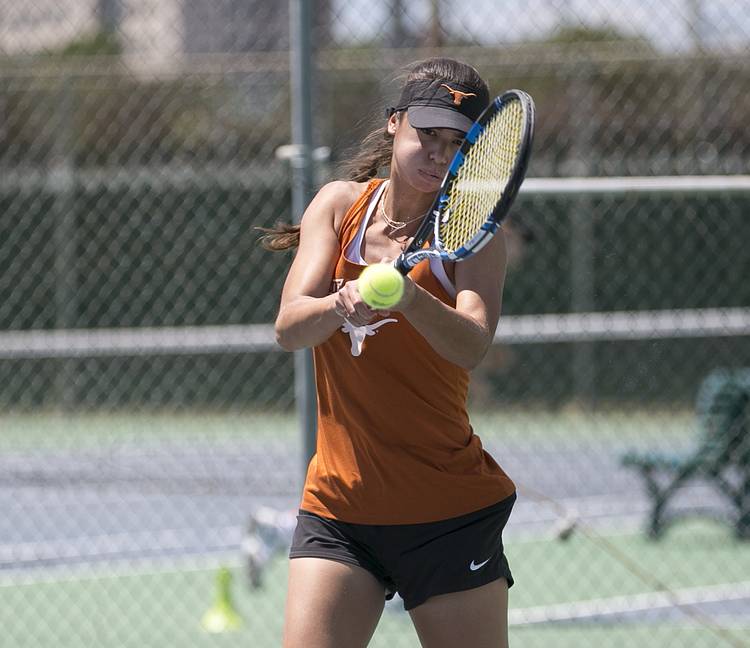 Neda Koprcina practices at the Whitaker tennis facility which the University of Texas tennis teams are using while new facilities are being built on Thursday, May 4, 2017. DEBORAH CANNON / AMERICAN-STATESMAN

After dropping the doubles point, the Longhorns won just three singles matches Saturday as they fell to No. 14 South Carolina 4-3 in the second round of the NCAA Championships in Columbia, S.C.

Bianca Turati, Petra Granic and Anna Turati came away with singles victories, but it wasn’t enough.

“With respect to the future, one can’t help but notice that our three points today were the product of wins by each of our freshmen,” head coach Howard Joffe said. “Bianca, Petra and Anna were fabulous.”

Koprcina and Anna Turati opened the competition with a 6-1 doubles win over Hadley Berg and Paige Cline. South Carolina bounced back to win the next two doubles matches, however.

“The career of Neda Koprcina comes to an end today,” said Joffe of the senior. “Her teammates as well as coach [Courtney] Dolehide and myself couldn’t be more appreciative and in awe of what a classy and tough Longhorn Neda has been. Her toughness will be sorely missed.”

Bianca Turati’s win at first singles made it 2-1 in favor of South Carolina before Berg put South Carolina up by two wins with a victory over Daniella Roldan.

Texas fought back taking two straight wins before the clinching win by Horvit.

Bianca Turati will compete in singles at the NCAA Championships later this month.