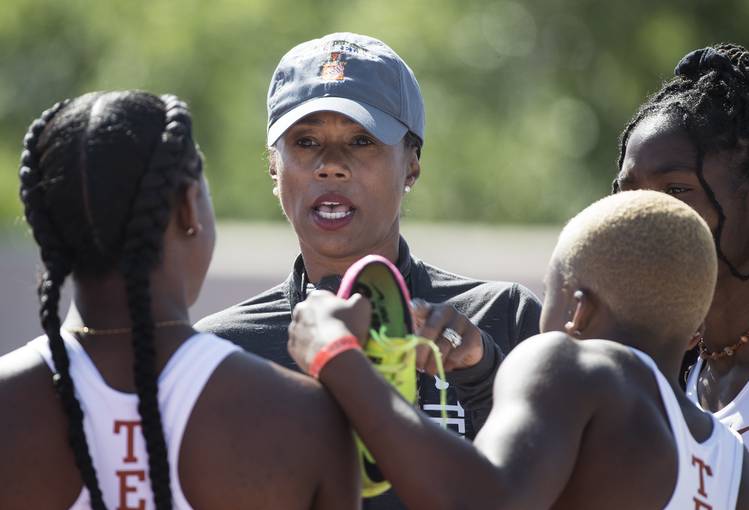 Texas interim track and field coach Tonja Buford-Bailey speaks with her hurdlers at the Texas Relays at Mike A. Myers Stadium on March 30, 2018. RICARDO B. BRAZZIELL / AMERICAN-STATESMAN

Texas has found an elite prospect in a familiar place.

Texas’ track and field program announced the signing of Shiann Salmon on Tuesday. A Jamaica native, Salmon becomes the 10th woman in UT’s 2018 recruiting class. Salmon is expected to compete in the 400-meter dash and 400-meter hurdles at Texas.

Shiann Salmon has signed her NLI to be a Longhorn. Welcome the No. 1 recruit in the world for the 400mH & 400m to The Forty Acres! #HookEm pic.twitter.com/IYQZfb4CRK

“There is no one like Shiann in the world right now that is not already running collegiate track and field,” UT interim coach Tonja Buford-Bailey said in a statement. “She is the top athlete in terms of the 400 and 400 hurdles available in this signing class with our other signee Sanique Walker being No. 2 behind her. I couldn’t be more excited to have Shiann make the decision to be a Longhorn.”

The signing of Salmon extends UT’s recruiting reach into Jamaica. Fellow Jamaicans Amoi Brown and Shian Hyde join Salmon and Walker in UT’s 2018 recruiting class. Texas sophomore Rushelle Burton, who is one of the program’s top hurdlers, is from Jamaica. As are freshman Washington Brown and sophomore O’Brien Wasome, who recently won the NCAA’s indoor championship in the triple jump.

WATCH: People in Seattle are starting to learn what Texas fans have known for years about Michael Dickson