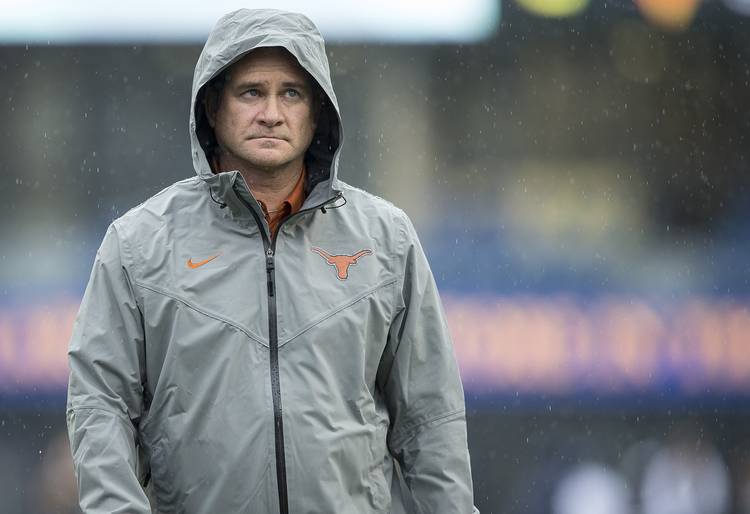 On whether OC Tim Beck will have success in 2018:

Tom Herman isn’t ready to tell us if he will be calling plays this fall.

We can all learn from history, even Coach Mensa. Tim Beck could become a play-calling monster in his second season or the Horns boss could allow him to lead the way down a similar thorny path that chewed up the feet of his predecessor in his early tenure.

Charlie Strong stuck with playcaller Shawn Watson for far too long, and Texas mustered only 21.3 points per game and six wins in his first season, despite the presence of a half-dozen eventual NFL players on the roster. Strong eventually brought in Sterlin Gilbert, who revitalized the offense behind hard-charging running back D’Onta Foreman but by then the Vance-Bedford-led defenses of 2015 and 2016 had cratered, becoming the two worst statistical defenses in school history.

As far as the present day is concerned, Beck didn’t impress in his Texas debut, and Herman didn’t do much better when Texas totaled only 280 yards and 3.9 yards per play in the Texas Bowl win over Missouri with him calling plays. Unlike Strong in his second season, Herman has Todd Orlando, who is being mentioned as one of the top defensive coordinators in the country.

Either way, this decision could be the difference between a realistic run at a Big 12 title or a second straight above-average season that will generate zero buzz on a national level.

“We’re going to do whatever is best for the University of Texas and for our offense,” Herman said at Big 12 media days. “I have always been very intimately involved in the play calling on game day. There isn’t a play that’s called that I don’t have veto power of, and so, you know, I think the true measure of an offense and its efficiency is one, the talent that he is on the field, certainly.”

I agree. Talent is important but it’s also a factor in the coaching booth. Beck has ability but Herman has a better track record in this area. Surely Beck will have a leash if he’s back calling plays. But how long will it be?

For the rest of Cedric’s Nuggets, including his thoughts on former Texas first baseman Brandon Belt naming his newborn after his former coach and Johnny Manziel trade news, click here.

Kody Clemens: ‘He is going to be someone to be reckoned with down the road’

Texas history: 5 Longhorn records that could realistically fall in 2018