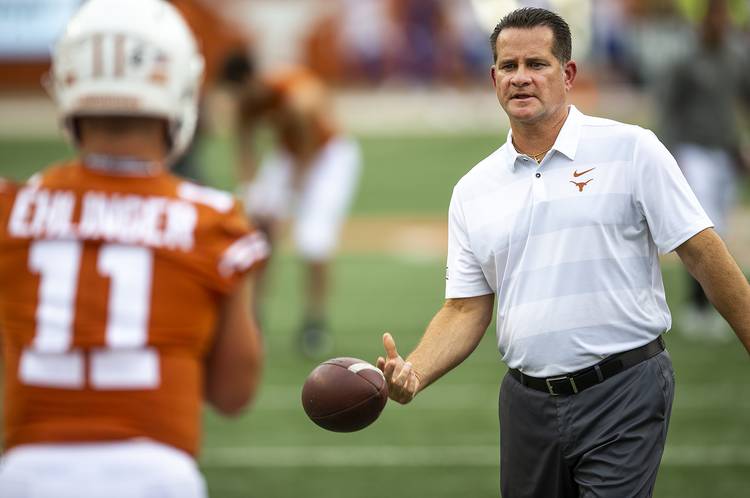 Texas assistant coach Tim Beck snaps the ball to quarterback Sam Ehlinger (11) during warmups before a game against Tulsa in Austin on Sept. 8, 2018. NICK WAGNER / AMERICAN-STATESMAN

Citing multiple sources, Zach Barnett of Football Scoop reported on Tuesday that Beck will be North Carolina State’s next offensive coordinator. That news was later confirmed by The Athletic’s Bruce Feldman and Stadium’s Brett McMurphy. Feldman added that the hire could be announced on Wednesday.

On Tuesday evening, Beck will coach the Texas quarterbacks in the Alamo Bowl.

With his 3-year tenure at Texas set to expire tonight, sources tell @FootballScoop Tim Beck is expected to be the next offensive coordinator at NC State.https://t.co/oF5g7IkPIk

SOURCE: Former #Texas OC Tim Beck is expected to be the next offensive coordinator at #NCState. An announcement could come as early as tomorrow.. Beck and Dave Doeren go back to their KU days in the mid 2000s.. Zach Barnett first reported the move.

Since the kickoff of the 2017 season, Beck has mostly served as UT’s offensive coordinator. He was relieved of his play-calling duties in 2018, however. Earlier this month, Texas announced that Beck had been stripped of his title and would just coach the team’s quarterbacks in the postseason.

A three-year contract that Beck signed after leaving Ohio State expires after this season. Since new offensive coordinator Mike Yurcich also specializes in tutoring quarterbacks, it seemed unlikely that Beck would return in 2020. Yurcich’s hire was made official on Sunday.

Over the past three seasons, Texas has averaged 32.6 points. Nationally, Texas ranked 53rd and 46th nationally in scoring offense in 2017 and 2018. The Longhorns, though, have climbed to 18th this season. Beck was also influential in the development of junior quarterback Sam Ehlinger, who needs 398 yards on Tuesday to set UT’s single-season passing record.

“I can’t say enough about how much he means to me and what he’s done for me throughout my college career, from developing me as a freshman all the way until now,” Ehlinger said on Sunday. “All credit is due to him, and so I love him to death.”

WELCOME | The newest member of the 2020 🏈 coaching staff brings experience from 6️⃣ college teams, including one from @ConferenceUSA. He comes to FAU from Texas.
Welcome to Florida 👍
#WinningInParadise👍 pic.twitter.com/TcbA3LIE74

Texas coach Tom Herman either fired or reassigned four of his assistant coaches at the end of the regular season. Ex-Texas receivers coach Drew Mehringer was recently named the co-offensive coordinator at Florida Atlantic. Corby Meekins, who also coached receivers, has been moved into an administrative role at Texas. Former UT defensive coordinator Todd Orlando has not yet landed his next job.

Texas’ Tom Herman on new hires: ‘I know this is going to be an important offseason for me’