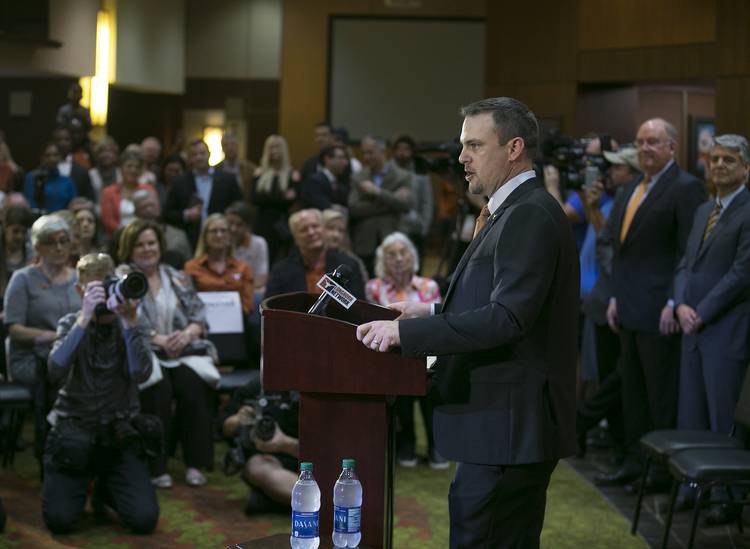 Texas Longhorn fans looking for more insight into newly hired head football coach Tom Herman can read about what may be in store from the man himself.

At the start of the University of Houston’s 2015 season, then-head coach Herman penned a first-person essay for Sport Illustrated’s Campus Rush site, detailing his approach to head coaching.

Ever heard the story of a high school recruit named Andrew Luck showing up to Rice University for an impromptu tour with Herman? Back then, he was the Owls’ offensive coordinator, and he admitted the tour did not go as planned:

So, I spent the next two hours fumbling around, and the kid saw all our warts. I went home that night feeling terrible—a combination of wanting to vomit profusely and curl up in the fetal position.

Luck ended up committing to Stanford and eventually landed in the NFL. The experience shed new light on recruiting:

It’s almost a mantra for our coaches: Your offices better stay neat. You better have a highlight tape ready, a recruitment presentation ready, all your spiels ready, because there are 10 five-star prospects living within 20 minutes of us and they can show up at any time.

Herman spent three years as the offensive coordinator under Ohio State’s Urban Meyer and the significance of that position is apparent as he describes bringing his techniques to Houston.

I’ll be honest, I’ve taken about 90% of the foundation of the program from Urban—conditioning, class schedules and structure of the program. This place is like a mini-Ohio State.

Fans and media have already begun wondering how Herman will handle the team and it seems he’s thought about the relationship between talent and systems before at Ohio State.

Philosophically, we wanted to be balanced. But we couldn’t throw the ball. We had a good line, a beast at tailback in Carlos Hyde and a freak at quarterback in Braxton Miller. It was one of my proudest achievements in coaching. We didn’t try to fit a square peg in a round hole.

Longhorn fans can expect to see Herman and his coaching staff all over social media when it comes to recruiting based on his efforts at Houston.

There’s a tweet quota that you have to have on our staff. I’m not going to say what it is, but Twitter is free marketing, and everyone on our staff has to do it. To not use social media would be a huge mistake. Our target audience stares at their phones nine hours a day. Why would you not put the UH logo in front of them as many times as you can?

Not convinced of Herman’s dedication to his players? The story of ripping up tiles in his facility is pretty compelling.

I went to Home Depot, bought a bunch of scrapers and spent a night peeling the tiles back. I was fully prepared to spend my own money to put a floor down. It was for my guys and for recruiting. I peeled up the floor myself because if somebody was going to be angry about it, I didn’t want anyone else to get in trouble but me.

At his introductory press conference, Texas’ new coach talked about the pressure of winning, and his essay makes clear that victories are important.

They’re going to keep score in life. It’s O.K. I’ve failed hundreds of thousands of times. I probably failed 100 times today. But winning is not supposed to matter to me? I don’t know if I’ll ever be able to grasp that. Forget the awards. You should want to be the best at whatever your chosen field is. I want my kids to win.

Want to read more? Check out the full essay on Campus Rush.

Justin Tucker makes NFL history against Bengals, and the Ravens are super proud