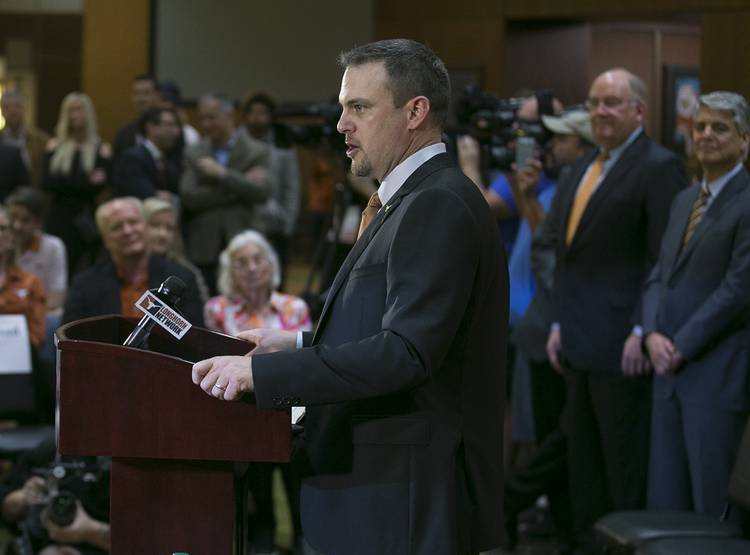 Tom Herman was introduced Sunday as Texas’ 30th head football coach. Here are our staff’s initial thoughts on the hire:

Brian Davis: For UT, it was always Herman

In this case, there was no Plan B. It was Tom Herman or bust for Texas President Gregory L. Fenves and athletic director Mike Perrin. While they wouldn’t go into details about the interview process, Fenves said, “what is important is that in the end, we got our man.” I’d like to imagine those two interviewing Herman at Buc-ee’s in Bastrop, which sounds better than the generic “undisclosed location” that was mutually convenient, as UT officials said. At this point, who cares? This is the closest thing to a home run hire Texas officials can make. Herman is 22-4 in two seasons at Houston and 6-0 against ranked teams. UT fans are simply starved for a winner. At this point, if Herman can get the Horns to a bowl game, that would represent progress.

Make no mistake. Tom Herman is very polished. As well as prepared. He had to be both to impress Fenves and Perrin over a few hours on Friday night to convince them to entrust the reins of the Longhorn football program to a 41-year-old Ohioan who has been a head coach for only two seasons. From his opening remarks, Herman showed that he gets it — the pressure as well as the opportunity — and he made it clear he’s not softie. “This is not going to be Camp Texas,” he promised. Let the work begin.

Cedric Golden: He’s got time to get this fixed

Tom Herman came across as thorough and prepared. The media throng that greeted him at Belmont was chock full of questions about his staff, his new team, and the events that led to him becoming the 30th head coach at the University of Texas. Predictably, he was general in his answers. “I’ve only been here for six hours,” he told one of us. He will have plenty of time to get it fixed, at least three years if recent history means anything. Charlie Strong believes a national title is just around the corner. While I don’t believe it’s that close, good times could be on the way. We’ll see.

Herman said all the right things. He hit all the high points. He first thanked Perrin for his kind words, then Fenves for the “wonderful opportunity.” He then thanked Houston. He talked about how Texas “holds a seat among college football elite,” and how “we will build champions and will build men of character, and will do it all with integrity and class.” He let all former UT players know that the door is always open. And he reached out — several times — to Texas high school coaches, recalling the names of head coaches and junior varsity coaches that he dealt with very early in his career. It was the stuff that burnt orange diehards surely soaked up. If you’ve spent the past three years frustrated over the program’s lack of consistency, Herman is probably right up your alley.