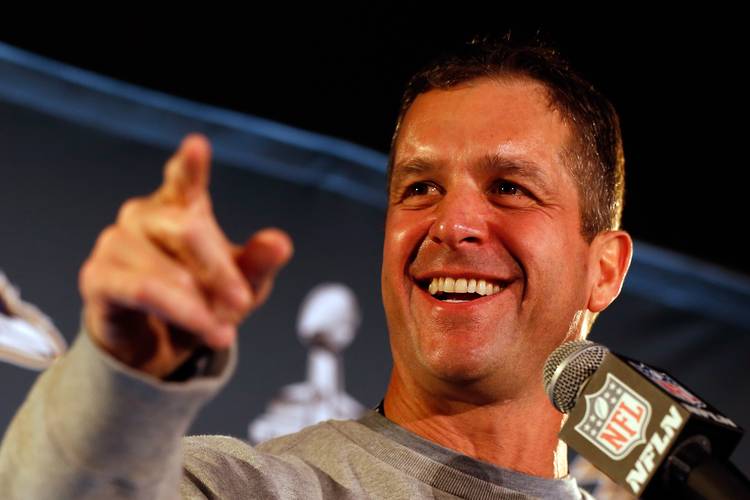 Head coach John Harbaugh of the Baltimore Ravens addresses the media during Super Bowl XLVII Media Availability at the Hilton New Orleans Riverside on January 30, 2013 in New Orleans, Louisiana. The Ravens will take on the San Francisco 49ers on February 3, 2013 at the Mercedes-Benz Superdome. (Photo by Scott Halleran/Getty Images)

Kirk Bohls released this week’s nine things and one crazy prediction yesterday. A few were dedicated to the Longhorns and the Big 12. Here’s Kirk’s take on some Bevo related items:

How close was John Harbaugh coaching at Texas?

Heard an interesting rumor that Baltimore Ravens head coach John Harbaugh was in Austin during Thanksgiving week, played golf with Texas bigwigs and said he’d come coach the Longhorns for $8 million a year. But my best source at Texas insists that didn’t happen. Sure juicy, though.

Thoughts on the new football coach at Baylor:

Baylor hired the hot, new coach that isn’t Tom Herman and has to hope that Matt Rhule translates into big success in a region where he’s never worked. Is he that good or just the hot, new coach in a very shallow pool of them? It’s a roll of the dice since the almost 42-year-old Rhule has been a head coach for only four seasons at Temple and never coached further south or west than Western Carolina. Best advice for Rhule when addressing Texas recruits? Just tell ‘em you coached at Temple and let ‘em think high school. Hey, it worked for Sterlin Gilbert. Baylor athletic director Mack Rhoades tells me Rhule is “a CEO, a transformational leader of people who builds team and relates to all people and is a ball coach. He knows both sides of the ball and will resonate with Texas high school football coaches. They will want their players to play for him. He will make great football players and better men.” Lord knows Baylor needs a lot of that. Rhule had better hire several staffers with in-state connections to the high schools.

Jerritt Elliott has his plate full with his Texas volleyball team set to host a regionals round, starting with a semifinals match against BYU at Gregory Gym this Friday afternoon, but that doesn’t mean he doesn’t have time to fix the sport he coaches and loves. Of all the Texas sports, the volleyball program and Eddie Reese’s swimming and diving programs are by far the most consistently excellent on campus. Elliott’s overjoyed to be hosting after sweeping UT-Rio Grande Valley and SMU, but he’d prefer a more entertaining and fair scenario that would ensure sellouts. “I’d like to see us play two out of three in the Sweet 16 and two out of three in the Elite Eight, but keep the Final Four the same as one-and-done,” said Elliott, whose fourth-seeded Longhorns will be competing in their 11th straight Sweet 16. “This has to change. We’re trying to grow the sport. That’s the only way to make enough money, and this is one of the steps.” Plus, Elliott is railing on all four regionals being played in the same time zone, forcing bizarre starting times. Nebraska, for instance, plays seven-time NCAA champion Penn State so early on Friday, it starts its warm-up at 7:30 in the morning, “which is ridiculous. I don’t know how many people will be watching a morning match.” The Cornhuskers and Nittany Lions have won eight of the last 10 national championships. “We need a day in between matches and go to a Thursday-Saturday or Friday-Sunday format to get better fan attendance and better television ratings. It’s a no-brainer. A couple of other coaches are with me, but we need to think more business-like. There is a business side to sports, and it deals with financials. With this format we can double our attendance and become a tier 1 sport. This would allow us to seed all 64 seeds and continue to grow our game.”