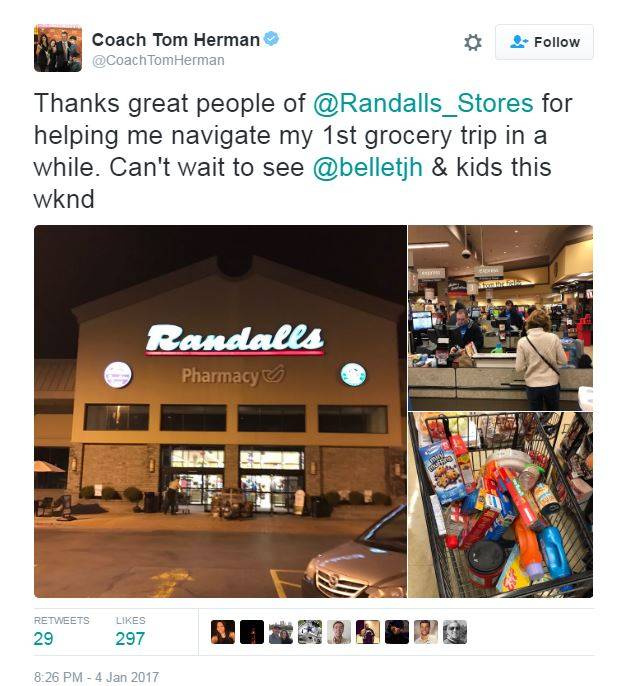 Texas football coach Tom Herman went on a grocery run on Wednesday evening and decided to share his experience on Twitter. But the photos he posted have raised some … concerns.

We’ll put aside the most egregious offense – Randalls over H-E-B? in Austin? – and focus on Herman’s shopping cart, which boasts not one but three varieties of sugary cereal, mini muffins, a pack of Ramen and mac ‘n’ cheese, among other things. To his credit, he included bread, eggs and a fruit tray (the lone produce, it appears).

Twitter took notice with questions and a few tips:

1. I know how much money Tom Hermam makes. Does he?
2. How many meals do you eat cereal at?
3. How you gonna get Hamburger Helper & no beef? https://t.co/LlGNV4Qkk4

I'm wondering:
1) why hasn't he been grocery shopping in a while?
2) why he needs help?
3) why there are no vegetables?

4. Why chicken ramen?
5. Can I interest you in shells and cheese?
6. Why not a bigger thing of detergent? You'll just be back next week. https://t.co/LlGNV4Qkk4

7. Why Hostess muffins? Randalls has a bakery.
8. Why 50 paper plates when you got 3 boxes of cereal?
9. How does Tom Herman like his eggs? https://t.co/LlGNV4Qkk4

Also upset that I don't see bacon in the basket. That's unsettling.

Nice. What are the kids going to eat? 😉

Folgers? You need a graduate assistant in charge of coffee with choices like that.

Did Buddy the Elf write your grocery list for you?

But it was all in good fun, with Herman’s wife, Michelle, also chiming in:

@JENuineFitness not going to be happy w/these choices 🙄. Think I'll be making another stop on the way. Appreciate the effort! #dadlife https://t.co/54iYQZ20Fu

Yay for the fruit! I'm sure, that'll be filling 👍🏼 https://t.co/ySvOgMJEtB

@aasdanny can't finish drinking my coffee, laughing so hard at your questions 😂. You're a very astute shopper…can you help a coach out? https://t.co/my5U7GCsIt