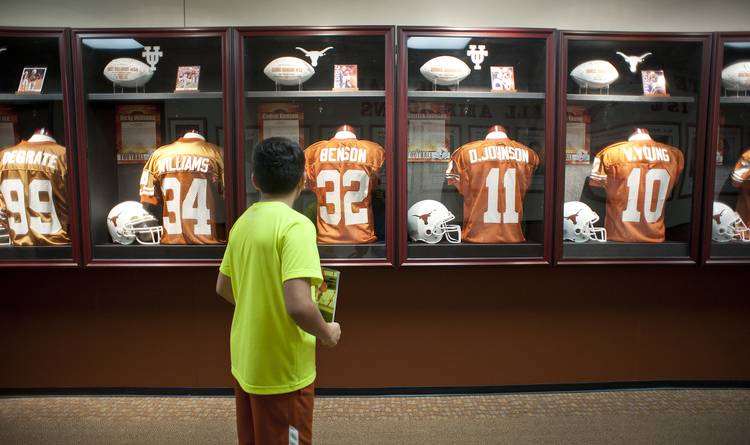 Cesar Labrada, 12, from LaGrange, checks out a display of uniforms belonging to former star players during the 2013 Texas Football Fan Appreciation Day held Saturday, August 3, 2013 at the Moncrief Athletics Complex on the University of Texas campus. A large crowd gathered to meet players and coaches, get autographs signed and get their pictures taken with head coach Mack Brown. Andy Sharp / For the American-Statesman.

Texas athletic director Mike Perrin continues to rave about new football coach Tom Herman. “I’ve been very impressed with Tom from the day he first arrived,” Perrin said. “He’s extremely detail-oriented, very organized. He drives himself very hard. He’s extremely articulate and relates extremely well to students and parents.” The remodeling of the football locker room should be complete by June with 126 new lockers and more drop-down television screens. Perrin said, “Tom’s talked about a water feature (in the locker room like Alabama and Clemson), but he hasn’t explained it to me yet. Remember, I stayed in Moore-Hill Hall (at Texas), and we were the first class to have air conditioning.” … Perrin said he hasn’t discussed the idea of playing Texas A&M. The matchup will happen “one of these days. Sometime, I think it will get scheduled. It’ll come back, but I can’t tell you when.” … Perrin also said he “wouldn’t be surprised to see something happen” with future Big 12 expansion and said of his own time as AD, which ends in August 2018, “I like what I’m doing, and (president Greg Fenves) likes what I’m doing.” He declined to discuss the relocation of the next Erwin Center when the current structure gives way to the UT Dell Medical Center, but I’m wondering if the preferred site south of Myers Stadium is just too small with too much ground elevation to be a realistic location.

On the Texas-Baylor women’s hoops rivalry:

Thank you, Texas and Baylor women’s basketball. You’ve given us an intriguing, colorful, new rivalry. Their sensational game Monday night at the Erwin Center reminded us how much we are entertained by a gritty, emotional hatefest between two terrific teams. Kim Mulkey coaches like her hair is on fire — or like she wants to light referees’ hair on fire — and speaks the same way, chastising probably phantom critics. After her Lady Bears beat the Longhorns 70-67 in a thriller to gain sole place of first place in the Big 12, Mulkey wagged her finger at “everyone (who) wanted to say we were stale food, there’s a new sheriff in town.” Baylor still has the badge on its chest, but Texas coach Karen Aston was not amused and said, “I’m well aware that we’ve got to talk about sheriffs and all kinds of crap, but I thought we played really hard and we just didn’t win,” Aston said. Translation: Aston was boiling over the loss and Mulkey’s response in complaining about Aston’s players flopping to get calls. Plus, Mulkey was smug in bragging on the atmosphere but talking about $5 tickets and saying, “You don’t give away something. You’ve got a good product on the floor, you don’t sell it cheap. I guess you got to do what you need to do to get ‘em in the stands.” Keep it up, Kim. And keep restocking your lineup, Karen, who will add two all-star recruits to have nine — yes, nine — McDonald’s All-Americans on next year’s roster. It would help if talented freshman Joyner Holmes would find her way to the basket instead of settling for jump shots that she rarely sinks. The Lady Bears made a living in the paint with 36 points there. Yes, Baylor’s still the sheriff, but Texas may be deputized soon. When’s Round 3?

For the rest of Kirk’s 9 Things, including his thoughts on the opening weekend of UT baseball season, running backs coach Stan Drayton and the NBA All-Star game, click here.

Before Texas, Coach Tom Herman was fired from Subway for eating too much pastrami