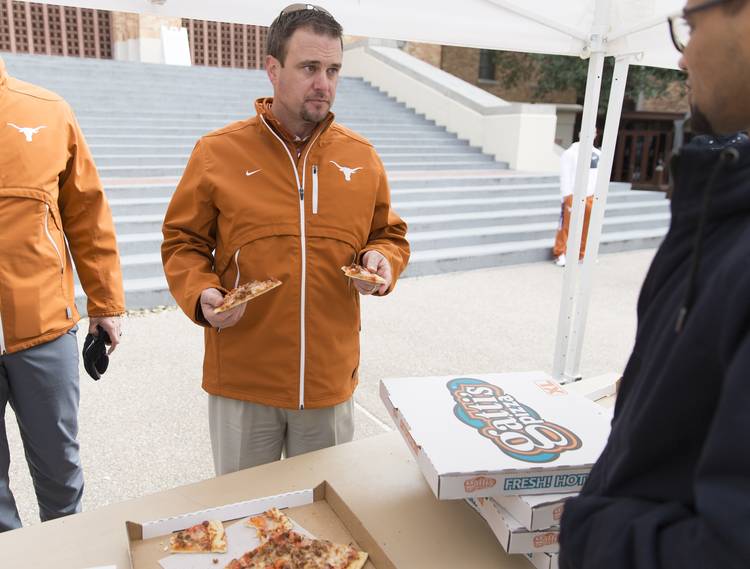 Texas Head Football coach gathered outside of Gregory Gym to give away free pizza and meet students as they get ready and prepare for finals on Friday, Dec. 9, 2016.

Yeah, before Tom Herman was appointed Texas’ new coach he turned around the football program at the University of Houston. But before that?

Before that the fearless Longhorn leader was fired from Subway after he was caught eating pastrami in the walk-in freezer with the door shut behind him.

In case you had forgotten, Herman has gotten digs in the past about his eating habits after he posted pictures of the questionable contents of his shopping cart to Twitter. According to the Dallas Morning News, Herman’s bachelor-like eating habits were present even during a high school gig at Subway, where Herman worked as, what he calls, a “Subcontractor. Or Submarine contractor.”

“I used to love the pastrami. They had those big walk-in refrigerators. I was standing in there one day, with the door shut, just throwing pastrami in my mouth,” Herman told the Dallas Morning News. When Herman’s then-boss walking in on the whole situation his only words were reportedly, “Get out. Don’t come back.”

Among Herman’s other pre-Texas gigs? A tuxedo salesman and being “an awful athlete” as an employee at a batting cage.

Bohls: What’s this about a water feature in a remodeled Texas football locker room?