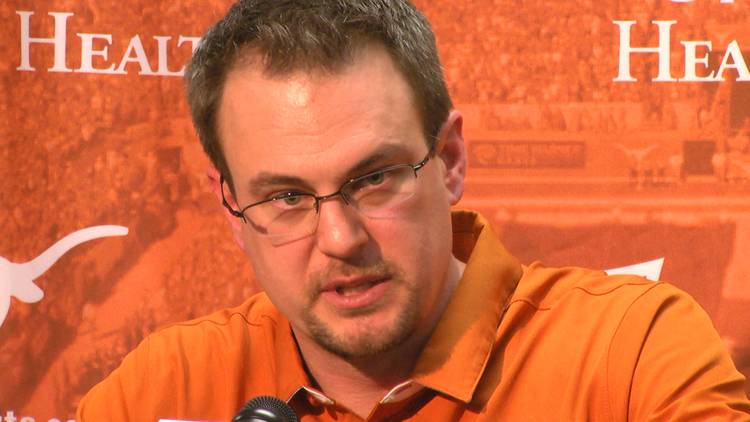 In this week’s Golden’s Nuggets, Ced touches on a couple Bevo-related items: Here is his take:

Tom Herman’s “embarrassing” comments at Monday’s presser and what it means:

Want a quick illustration of the mountain Tom Herman is attempting to climb?

His first team meeting pretty much laid out the distance between where the Texas football program is and where he hopes he can take it.

“I think I said, raise your hand if you played on a winning football team at the University of Texas,” Herman said Monday. “And there were like three hands that went up. So that’s a little bit shocking, but at the same time, I think they also know that we’d better try something.”

That something, whatever it is, will hopefully yield different results for fans who have endured three straight losing seasons while other programs in the state — Texas A&M, Houston, and Baylor — have won consistently in the same time frame. Herman gets his first football look at a team that’s he never studied on film in Tuesday’s first spring football practice.

While I don’t totally understand him not studying last season’s tape to see who gave a full effort— and more important, who didn’t — Herman hasn’t run away from the vital statistics and that’s the 16 wins in three seasons.

He said the upperclassmen, who have been home for the postseason the last two years, have been more receptive than the group in Houston that was coming off an 8-5 season, including a huge comeback win over Pittsburgh in the Armed Forces Bowl. For its part, Texas hasn’t won a bowl game since beating Oregon State 31-27 in the 2012 Alamo Bowl.

“I think there were some kids there that still kind of looked sideways at us when we told them to do certain things,” he said. “But here I think our guys are embarrassed, and they understand that change is necessary in order to achieve some results.”

Herman on the running backs at the outset of spring camp:

It’s safe to say Herman would be feeling a lot better about this offense if he had the services of 2,000-yard rusher D’Onta Foreman, who wasn’t able to work out at the NFL scouting combine after it was discovered that he had stress fracture in his foot.

Chris Warren III has the most skins on the wall of the players in the running back room, but Herman seems to be waiting for him to become a battering ram with great feet. Sort of what Foreman was over his last two seasons. Warren ran for 367 yards last season and averaged 5.9 yards per tote before he hurt his knee in the Big 12 opener at Oklahoma State.

“I kind of pulled him aside during one of the workouts,” Herman said, “and I said, you have been a very pleasant surprise, and you’re going to make a lot of money someday playing this position — if you put your pads down and run through somebody.”

Herman added that he hasn’t been around a back like the 250-pound Warren who can move the way he does.

“It’s a pretty cool thing,” he said, “but again, football is not played running around cones.”

For the rest of Cedric’s Nuggets, including his thoughts on Texas’ hoops season and a possible return of Tony Romo to the Cowboys, click here.

50 in 50: WATCH: Can the Longhorns still claim they are DBU?