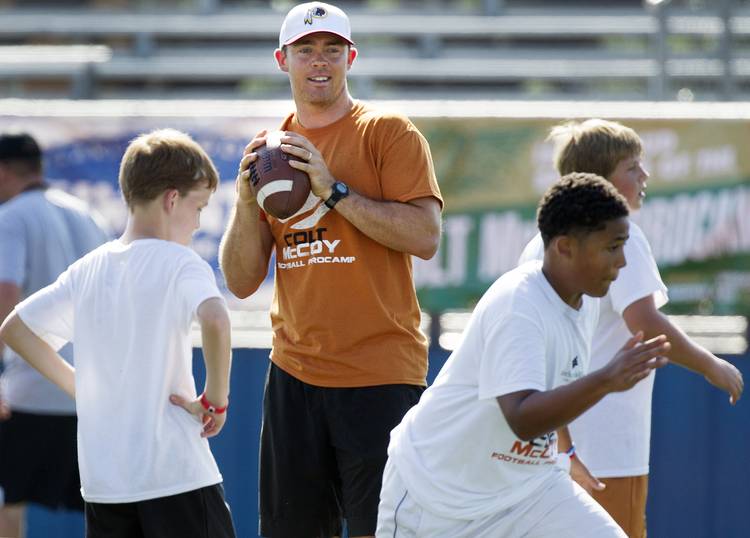 Colt McCoy, who lives in Austin three months of the year with wife Rachel and daughters Sloane and Brooke, looks as refreshed, fit and ready to play as ever. He’s signed for two more years with the Redskins and loves it in Washington, where he backs up quarterback Kirk Cousins, who recently was franchised by the club for the second straight year. McCoy, who didn’t play a single snap in 2016, said “I feel I have a great handle on how to run the system” while attending the WGC-Dell Technologies Match Play draw Monday night. “My job’s to be prepared. I’ll be ready, and I just have to climb the ladder to get the chance.” McCoy said the nerve damage he suffered in his neck during the 2009 national championship loss to Alabama lingered and was “a 3-, 4-, 5-year deal,” but he also has dealt with broken ribs and a shoulder injury. He doesn’t know if he’ll eventually go into coaching, but said he’s “already been offered jobs at every level. NFL. Colleges, too. People have been gauging my interest.” McCoy also raved about the leadership shown by new Texas football coach Tom Herman, saying, “He has a vision and a plan.” McCoy said he’s been so dejected over the Longhorns 16-21 record over the past three years that “I’ve been in the NFL for eight years and I can’t wear anything (Longhorns-related) in the locker room.”

Mack Brown on Vince Young’s career move to the CFL:

McCoy’s not the only former Longhorn trying to regain a starting position. Count Mack Brown among those who are rooting for Vince Young’s second chance at a football career to take hold. Ran into Mack at the NCAA women’s basketball tournament at the Erwin Center, and he’s 100 percent behind Vince’s attempt at a comeback in the form of a job with the Saskatchewan Rough Riders. “You’ve only got one life to live,” Brown said, “so why not go for it. I give him a good chance.” McCoy said the same, adding, “It’s hard when you love something so much, it’s hard to let that die. His passion is still there. I’ll be pulling for him.”

Herman on his golf-playing style:

Tom Herman said Texas is actively recruiting former LSU quarterback Brandon Harris, who announced he is transferring, but Harris has not yet visited Austin. That’s one thing about Herman. He uncovers every stone. Harris is a dual-threat quarterback, although some think he’s not a credible passer. Herman said he will play in the Byron Nelson Pro-Am in Dallas in May, but suggested he is one terrible golfer even though he loves the sport. “I’m awful,” Herman said. “I’ll be Charles Barkley. I’ll be the comedic relief.” The coach said he probably won’t get out to the Dell tourney this week. “I’ll probably watch from the comfort of my living room. Or Major Applewhite’s living room.”

For the rest of Kirk’s 9 Things, including his thoughts on what name will be on Texas’ new hoops arena, the NCAA tournament and Big 12 basketball, click here.

WATCH: ‘We want to prove to this coaching staff that we’re not a bunch of 5-7 guys’

WATCH: Tom Herman – ‘We’ve got to build our football stamina’