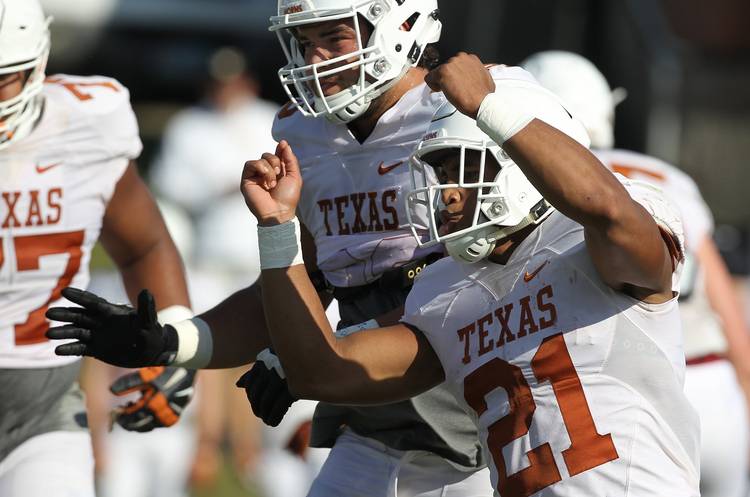 Tom Herman’s first spring camp at Texas is a test of toughness.

Junior safety DeShon Elliott said he’s heard the words “physical” and “tough” thousands of times this spring, and surely there are thousands more to come.

Has this been the toughest of his three spring camps?

“I would say yes, as of effort,” Elliott said Tuesday. “Now we’re like, ‘OK, I can’t let my guy down next to me.’ You have to play hard every play and run to the ball on every play. That’s just how it is. We have a standard that we want to set, and that’s what we’re trying to do and accomplish as a team.”

Herman has gotten a good look at his team in full regalia, which he’ll take all day long over shorts and helmets. Coaches call them shells, which is appropriate because it’s basically a shell of a football uniform. Time and again, Herman has said, “football isn’t played in shorts.”

In the 15 minutes of practice we got to see from the other side of the field on Tuesday, there was an unmistakable physicality in the air.

Injury updates: Herman said that offensive lineman Zach Shackelford had surgery Tuesday on his ankle, and that he’s expected back for fall camp. Shackelford, who started at center last season, was named to the Football Writers Association’s freshman All-American team. And defensive lineman D’Andre Christmas will have surgery to repair a sports hernia injury after the spring game on April 15. He also is expected back for fall camp.

Porter’s chance: There is no questioning the toughness of freshman running back Kyle Porter, who has taken advantage of some injuries suffered by other running backs to receive some first-team reps. Porter carried the ball high against his shoulder pads on Tuesday, a fundamental improvement from his fumbling issues last fall. Named the most outstanding player in the UT scrimmage along with Elliott — Herman calls the award the Freak of the Week — Porter got numerous totes early in practice and also was seen catching swing passes out of the backfield.

“He’s seizing it right now,” Herman said. “He runs hard. It’s really hard to run against our defense and we know that. Kyle never complains and never asks for a play off. Plus he makes yards as he’s being tackled.”

Familiar faces: Longhorn royalty was present at Tuesday’s workout. Bill Bradley was there with athletic director Mike Perrin. Colt McCoy was spotted talking strategy at midfield with Herman. Receiving great Quan Cosby was conducting a tour of fans over on the sideline.

Of interest was a conversation between Herman and McCoy in which the coach asked if the quarterback had ever played with tough wideouts, a question born of his desire to see more toughness out of the current receiving crew. Jordan Shipley and Cosby were extremely tough, McCoy answered.