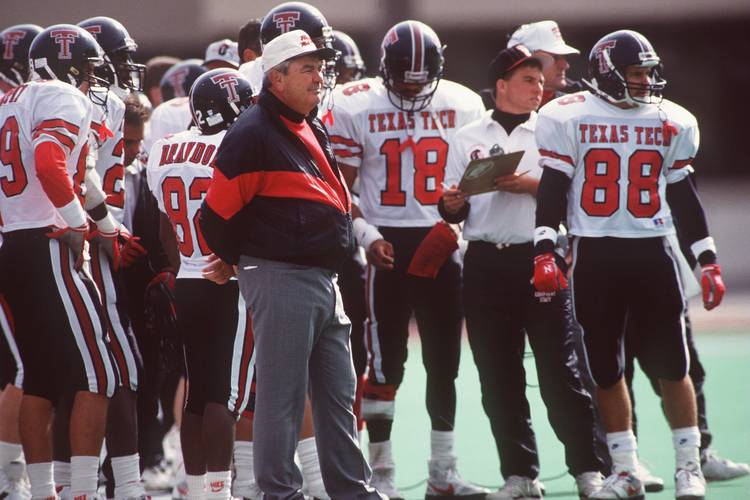 Kirk Bohls released this week’s nine things and one crazy prediction. A couple were dedicated to the Longhorns and the Big 12. Here’s Kirk’s take on those items:

On the passing of legendary Tech coach Spike Dykes:

To know Spike Dykes, you only need to know this. He once walked onto an airplane holding a chicken leg in his hand. That’s Spike. He died Monday and may have been the most unassuming, friendliest, genuine people I have ever met. When Spike did an in-home visit to Bart Reagor years ago, the defensive back’s mother had made fried chicken for the occasion. “When he came in, he took his shoes off, put his feet up on the coffee table and said, ‘I’m at home,’” Reagor recalled to the Lubbock Avalanche Journal. “I knew at that moment Texas Tech was going to be my home. He grabbed my heart. I wanted to be under the leadership of the one and only Spike Dykes.”

On whom Tom Herman should suit up for the spring game:

I don’t grasp why players need to retire on the roster of the NFL or NBA or whatever team that they were most associated with in their careers if they finished elsewhere. So it’s even more puzzling to see Tony Romo suit up with the Mavericks and go through shooting drills and the layup lane in warmups, fully dressed out in an NBA uniform. What’s next? The Rangers suit him up? Heck, Tom Herman should invite him to put on a Longhorns uniform for Saturday’s spring game. Romo was a poor man’s Dan Marino with tons of yardage and guts and playing hurt without a Super Bowl on the résumé. The ever-humble Romo on Tuesday called accepting the Mavs’ offer “a no-brainer to say yes,” and added that he didn’t feel he deserved it. I hope this trend doesn’t catch on. He added, “I feel they’re all 7 feet tall out here. I look like a turtle out there next to these guys.”

On former Longhorn Jordan Spieth’s struggles at The Masters:

Ben Crenshaw isn’t the least bit worried about Jordan Spieth’s psyche. “His expectations are way up there,” Crenshaw told me Monday. “He’s disappointed, but I have no reservations that he’ll be fine.” Crenshaw saw nothing technically wrong with Spieth’s golf swing at the Masters. “He’s like a racehorse. He wants to get at it so bad. Sometimes, he looks over-anxious and a little fidgety once in a while. I think he was trying so hard, but he finished beautifully (with birdies on three of the last four holes after the pressure was off). Maybe he was pressing a little bit.”

For the rest of Kirk’s 9 Things, including more thoughts on Dykes, Sergio Garcia winning The Masters and who his NBA MVP is, click here.