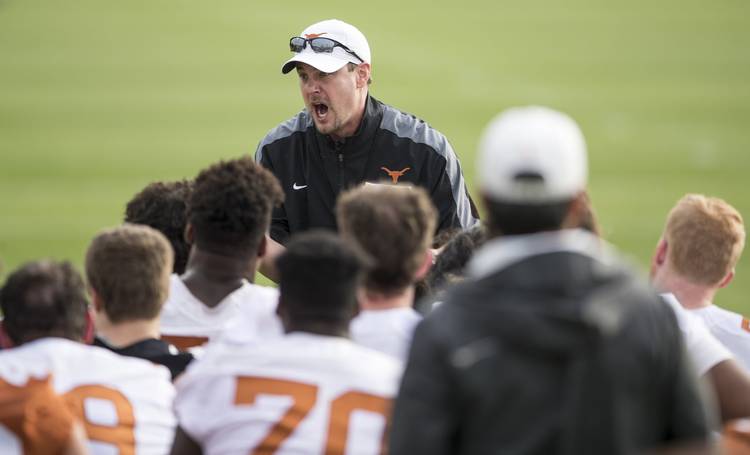 On the Longhorns new lockers, winning and recruiting:

So Tom Herman convinced the Texas check cutters that spending $10,500 per locker was a good idea?

That’s $892,500 for 85 scholarship players to change their jocks and socks, if you’re scoring at home.

Herman and his players sledgehammered the old lockers and are in the process of upgrading the team facility with new dressing quarters that will include a 43-inch video monitor that shows the player’s name, position and hometown, with a highlight or two. Decadent when compared with the nameplates we see in, um, NFL locker rooms.

“It just says that we’re providing our student-athletes with the best training facility in the country or as possible,” Herman said. “We’re restricted from a land-locked standpoint at times, but we’re going to make this facility as state-of-the-art and as first-class as we can. There will be no reason, from a facilities standpoint, for a recruit to want to go somewhere else.”

So is this all worth it? Only time will tell. If Texas wins, then it’s a relatively small price to play to regain its place among the national elite. It’s a recruiting tool, of course. Any of us who have been around teenage boys for more than 10 seconds knows 99.9 percent of them love shiny new things.

“At my high school, every male sports team shared a locker room and one field house,” said defensive tackle Poona Ford. “So if I see that coming out of high school, I’m going to be like, ‘Dang, that’s pretty sweet.’ That could the reason they commit here or something like that.”

Shoot, Lincoln Hawk would think this spending is way ‘over the top,’ but give Herman credit for being straight-up with his reasoning behind the expenditures. The land-locked reference suggests he would tear the whole building and start over if he could, and don’t think that hasn’t crossed his mind.

Winning is the ultimate recruiting tool. The glittery stuff will attract some nice players, but wins will get them here much faster.

For the rest of Cedric’s Nuggets, including his thoughts on the Spurs/Grizzlies series, the 2017 NFL schedule and Serena Williams, click here.