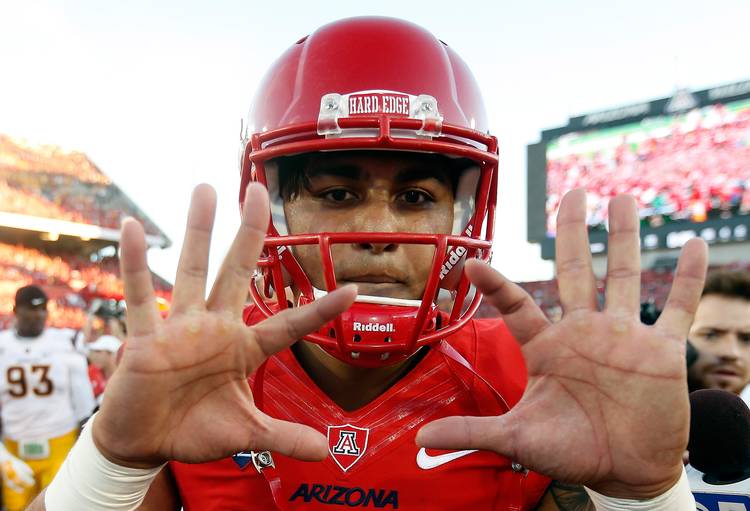 Kirk Bohls released this week’s nine things and one crazy prediction. A couple were dedicated to the Longhorns. Here’s Kirk’s take on those items:

On why Texas lost out on a transfer QB:

Texas lost out on another possible grad transfer in Arizona’s Anu Solomon, who transferred to Baylor partly because he declared so early that he was leaving the Wildcats and enrolled at midterm. He said Texas never reached out to him, but that was before third-string Longhorns quarterback Matthew Merrick gave up football, leaving Texas with only two scholarship quarterbacks. With different timing, Texas would have been interested. Solomon said after Baylor’s spring game that he never heard from Texas and said, “Of course, I’d like to have talked to every coach.” He was restricted from talking to any other Pac-12 school; he visited Oklahoma State and North Carolina. … Oh, he was born in Hawaii, knows how to surf, and his real name is Jarrett Pekelo Kahanuolaokalani Solomon. I’d love to see all of that on the back of his jersey. And he’s scared of rain. Seriously.

Credit (Tom) Herman for luring two high-profile quarterback commitments away from Oklahoma, as big a win-win situation as there is. Herman isn’t adopting Mack Brown’s philosophy of filling his recruiting class before the season, but will take players early if they’re the caliber of player who can help Texas win a national championship. Herman did tell me, “I think the early signing period for football is a great opportunity for everyone involved and long overdue. It allows those who know for certain that Texas is the place for them to go ahead and sign. I think it’s a positive step by the NCAA.” However, Herman said he is “disappointed by the length of the official visit window they decided on (April, May and June). I thought that’s something we could get done in a six-week stretch in April and half of May. My concern is that hosting recruits and recruiting will be dipping even more into our assistant coaches’ quality of life and well-being. They need some time to get away with their families.”

Notre Dame quarterback Malik Zaire is no closer to picking a school as a grad transfer and may not until after he graduates in late May. Texas remains on his list, but one source close to the situation told me Tuesday “it’s less than 50-50” that he will become a Longhorn. … Tom Herman will not move Jerrod Heard full-time to quarterback but only because he thinks so highly of Heard’s hands and routes as a wideout. He’d get between eight and 12 plays to get the Longhorns through a game if it’s an emergency. That’s a pretty good fallback.

For the rest of Kirk’s 9 Things, including his thoughts on Baylor quarterback Charlie Brewer, former UT golfer Bob Estes and Jim Harbaugh taking his team to Italy, click here.

Sealy pitcher pledges to throw at Texas in 2019