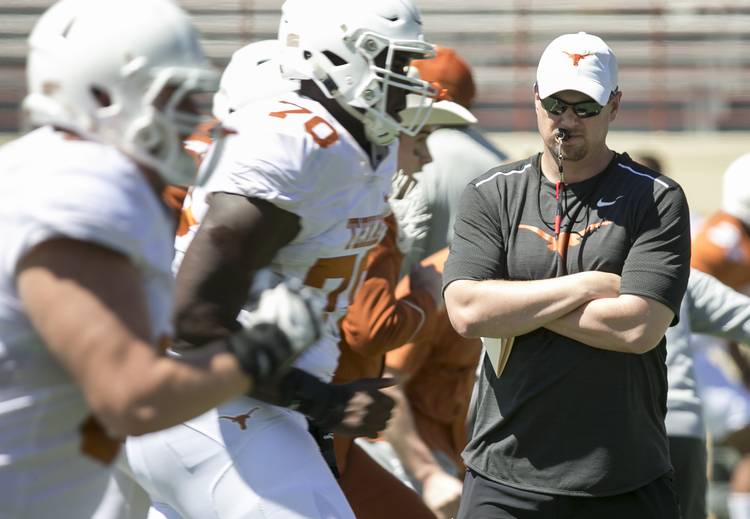 Kirk Bohls released this week’s nine things and one crazy prediction. A couple were dedicated to the Longhorns and the Big 12. Here’s Kirk’s take on those items:

On how the power vacuum in the Big 12 bodes well for Tom Herman:

The Big 12 is hurting, and that should excite Tom Herman. After yet another devastating showing in the NFL draft when only 14 players were selected — the fewest of any Power 5 conference — there is a power vacuum that the new Texas football coach can fill. The ugly results are a clear reflection of subpar talent in terms of evaluation, recruiting and coaching, and the league had better pay attention or it will suffer in terms of money, television ratings, attendance and beer sales. Sure, its smaller membership than the other leagues with only 10 teams hurts those draft numbers, and Oklahoma is the sole remaining heavyweight in a league of Kansases, Iowa States and, yes, Texases lately, which is why expansion was mandatory. Of the 12 slots in the three-year-old College Football Playoff, only one has gone to a Big 12 team in the Sooners, and only the Longhorns have even played for the national championship in the last 12 years. That’s lame. Pick it up, Big 12, or it’ll be the death of an already-sick league.

Oklahoma president David Boren underwent heart bypass surgery and has been recovering for a month. His term as president of the Big 12 ends next month at the annual meeting of the conference’s presidents and athletic directors. “It’ll be nice to have a lighter agenda,” commissioner Bob Bowlsby said. “Expansion? I have not seen it on the agenda.” The Big 12 has new presidents at Baylor and Kansas State and an interim one at Iowa State, and the league elects a new executive committee with a new chairman on May 31-June 2.

Despite ESPN’s purge of 100 employees, Bowlsby doesn’t see a threat to the Big 12 with ESPN as a rights-holder. “It depends on what the marketplace looks like when all rights agreements come up for renegotiations. For us, it’s not for another eight years. Almost all those television rights agreements go through 2024 or ’25 or longer.” … Texas sports business teacher Mark Pannes took issue with those “who insist ESPN’s political slant has impacted subscription levels, with some people fleeing the network because they disagree with its voice or position. That really has to be categorically false.”