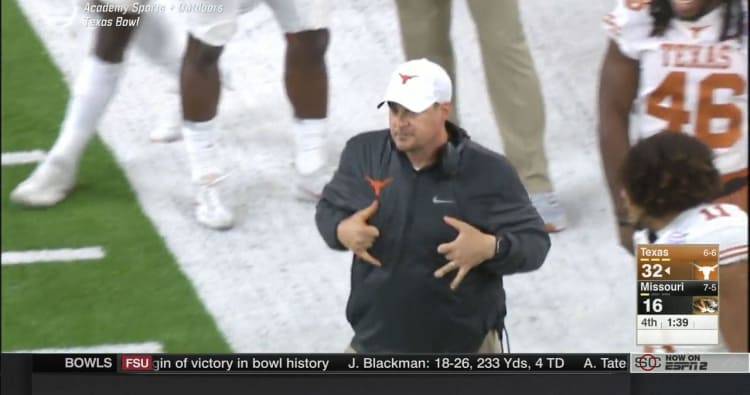 UPDATE: Here is the video that allegedly started this exchange:

As a winning season neared for Tom Herman, the first-year coach was caught on the sideline apparently mocking Missouri quarterback Drew Lock.

After Texas jumped out to an early 21-7 lead, Lock seemed to make a gesture after throwing a touchdown pass in the first half when Missouri looked to make a comeback.

Herman seemed to respond later with a gesture of his own.

Whether it was an actual taunt or not, Lock didn’t seem to mind Herman’s action.

In fact, he would’ve loved it if his coach did the same thing, according to the St. Louis Post-Dispatch’s Dave Matter.

Lock added that if his coach was mocking the other team’s QB he’d love it. I would have been like, “Damn, Coach is balling with us.”

Third and Longhorns: Inside Texas 33, Missouri 16