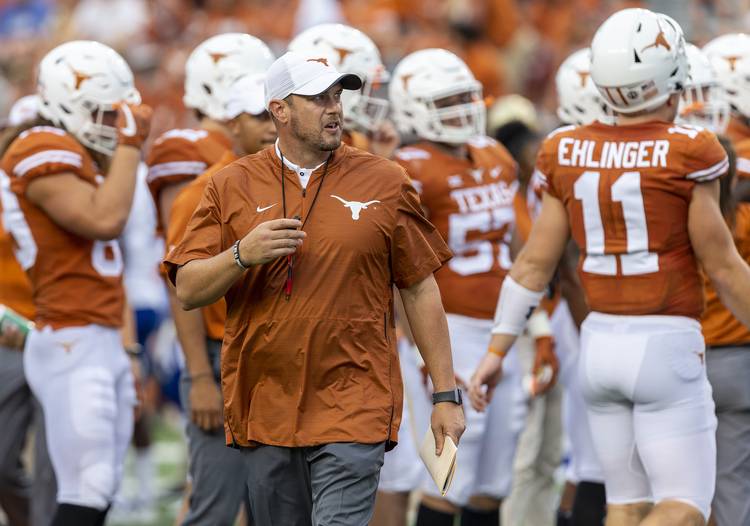 Tom Herman’s game-week press conference in advance of Saturday’s Texas-Oklahoma game was a bit different than any other so far this season.

After the Maryland loss, Herman’s following Monday was dominated by questions about his team’s psyche and his program’s stability. After the Tulsa win, that following Monday was dominated by talk of USC and Texas’ fragile status. After the USC win, this presser was about why Texas has struggled so much against TCU. And after the TCU win, it was about not having won in Manhattan since 2002.

Today, questions were asked in the light of what this Saturday’s matchup has become: A nationally-relevant matchup between two heated rivals that are both ranked. One of them has CFP aspirations, the other certainly could enter that national picture with a win.

“We understand the passion and the history and importance of this rivalry for both states, for both universities, for college football,” Herman said. “It’s a fun week to prepare but as I told our guys yesterday, they would look at me like I was crazy if I walked into that team meeting on Sunday and said hey guys, we’ve won four straight games but because we’re playing in the Red River Showdown we’re gonna do things in practice completely different than we’ve ever done them. We’re going to prepare the way that we know how to prepare, the way that we know works, but we’re also going to enjoy the week and enjoy the pageantry and the passion that’s involved in this rivalry.”

Things sound good on the injury front. Starting center Zach Shackelford returned against Kansas State. Linebacker Malcolm Roach had season-ending surgery last week. But beyond them, everyone should be back. “We’re actually on the mend, which is a good thing,” Herman said.

Speaking of Ingram, Herman was asked if the freshman running back who led Texas in rushing against Kansas State is ready for a heavier role, a featured back role.

“Certainly he’s ready,” Herman said. “Now he hasn’t been healthy since week 1 and we weren’t quite sure; as a true freshman you kind of want to ease him into some things. So yeah, I think he’s ready. Every first is a first. Every new thing is the first time, every blitz, every gap exchange. Running the football requires a vision and a skill, requires a bit of ability to predict based on fronts and coverages. There’s still some growing pains there, but he’s getting better each week.”

On the 19-14 win at Kansas State — Texas’ first win in Manhattan since 2002: “We didn’t always play our best, but we played our best when it mattered.”

On whether Texas finally knows how to “finish”: “Yeah. ‘Knows how to’ only requires one time of doing it, and then you know. Now is it a team that can consistently go do that? That still remains to be seen, but we understand the formula, we have confidence in our ability to do it, but the proof is in the pudding time after time after time.”

On the differences between Baker Mayfield-Oklahoma and Kyler Murray-Oklahoma: “The names have changed. I don’t know that the results have at all,” he said. “Maybe the difference is how elite of a runner their quarterback is. I remember him coming out of high school; he was a phenomenal player. Phenomenal. … Not a whole lot has changed. They’re still one of, in not the best, offenses in the country.”

On the health status of offensive coordinator Tim Beck, who missed the Kansas State trip after being hospitalized with an infection: “He has not (returned to the team). He is awaiting his discharge from the hospital as we speak. We’re expecting him back at the office this afternoon. It’s not like he’s been incapacitated. He’s got his laptop with him, he’s done all of the normal things you would do on a Monday morning from a game-prep standpoint. … I would imagine he’ll be fully ready to help us game-plan and practice later in the week.”

On how he’d grade the play-calling without Beck at Kansas State: “Offensive play-calling I thought was OK. I think we got a bit conservative in the middle of the game. We’re playing great defense, you’re up 19-nothing and it turns into hey, don’t lose this thing, don’t screw it up. And then we had a couple hiccups defensively and all of a sudden, it turns into a game. I thought we responded well. But we were trying to manage the game to win the game, and we did that. We didn’t turn the ball over, we had a 12-play, 90-yard drive for a touchdown. So I think it was good. If there was one thing I wish we’d done differently, it would’ve been to stay aggressive. We missed a couple of shots early and then it was boom, 19-nothing and you say OK, probably don’t need to do that anymore but we probably should’ve.”

On whether Texas needs to go back to its USC game plan against Oklahoma and take more deep shots downfield: “I don’t know. That is an interesting debate. The way that we managed the game against Kansas State is completely different than the way we managed other games offensively. We understand we’re a bit limited when we don’t play with tempo on offense, but there was definitely a concerted effort in that game offensively to keep our defense off the field. When they go on a 17-play drive that ends in a touchdown, the last thing we want to do is go throw the ball over somebody’s head three times in a row and put your defense right back onto the field.

“I think you’ve got to feel how the game’s going. If we’re playing good defense, then maybe you slow it down a little bit. If you feel like it’s going to be a boat race, then you start cranking it up a little bit. There’s no doubt we’ve got to connect on a few more deep shots. … Long answer to a short question: I think it depends on the other side of the ball. We pride ourselves in not being mutually exclusive; the goal of the offense is not to score as many points as you can, the goal of the offense is to score one more point than the opponent, at least one more point.”

No. 19 Texas and No. 7 Oklahoma kicks off at 11 a.m. at the Cotton Bowl. The Sooners are averaging 49 points a game (Texas 29) and 523 yards of offense (Texas 397). Oklahoma, West Virginia and Texas all are 2-0 atop the Big 12 standings. The ninth-ranked Mountaineers host Kansas this week.

With NCAA’s new rule in mind, Kyle Porter to contemplate a redshirt for the rest of 2018 season