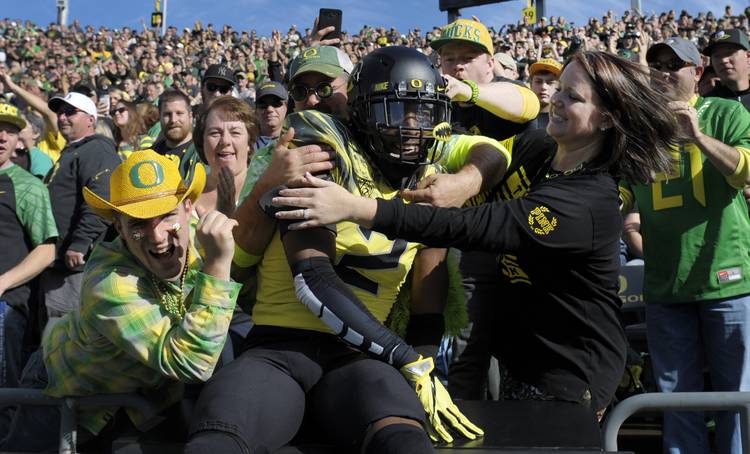 Defensive back Tyree Robinson #2 of the Oregon Ducks dives into the crowd before the game against the Arizona State Sun Devilsat Autzen Stadium on October 29, 2016 in Eugene, Oregon. (Photo by Steve Dykes/Getty Images)

Best-case scenario: The Ducks show that last season — only the school’s second sub-.500 campaign since 1994 — was an aberration and new coach Willie Taggart, formerly of South Florida, gets things back on track. Fans must hope the surplus of defensive returning starters just gained experience, and not bad habits, in 2016.

The key game: Sept. 30, Cal. As both schools attempt to bounce back from disappointing seasons, the Ducks and Bears will each have a new coach on the sidelines (Justin Wilcox replaced Sonny Dykes at Cal). Expect a lot of points to be scored in the schools’ second Pac-12 game; they combined for 101 points in last year’s double-overtime battle.

Spring cleaning: Oregon suspended its strength and conditioning coach Irele Oderinde in January for one month without pay after three players (OL Doug Brenner, OL Sam Poutasi and TE Cam McCormick) were hospitalized after a series of grueling workouts. … Despite the 4-8 season, Oregon still signed a top-20 recruiting class. … The Ducks didn’t have a player taken in the NFL draft for the first time since 1985. … Taggart cleaned house when putting together his new staff at Oregon; all 10 major coaching positions are new this year. Helfrich has not been hired anywhere, former offensive coordinator Matt Lubick is now Washington’s co-OC and WRs coach, and former defensive coordinator Brady Hoke is now Tennessee’s DL coach.

Who’s the QB?: Taggart declined to name a starting quarterback following the spring game. Herbert, a sophomore, threw for 327 yards in that scrimmage and looked good in the seven games after he replaced the Austin-bred Prukop in 2016. In last year’s win over Arizona State, Herbert set a school record with his 512 yards of total offense. (His 489 passing yards tied Oregon’s all-time high).

Defensive overhaul: Before 2015, Oregon had never allowed more than 370 points in a season. The last two years, the Ducks have surrendered 441 and 497 points. Jim Leavitt is Oregon’s third defensive coordinator in as many years, and he’ll need to fix a unit that gave up four 50-point games in 2016.

Chasing James: Royce Freeman was held to 945 rushing yards last year, but his 1,836 yards in 2015 is an Oregon single-season record. A senior, he needs 937 yards to overtake LaMichael James’ career record of 5,082 yards.

No. 23: Coming Friday. Want a hint? This school had three first-round picks of the 2002 NFL draft — John Henderson, Albert Haynesworth and Donte Stallworth.