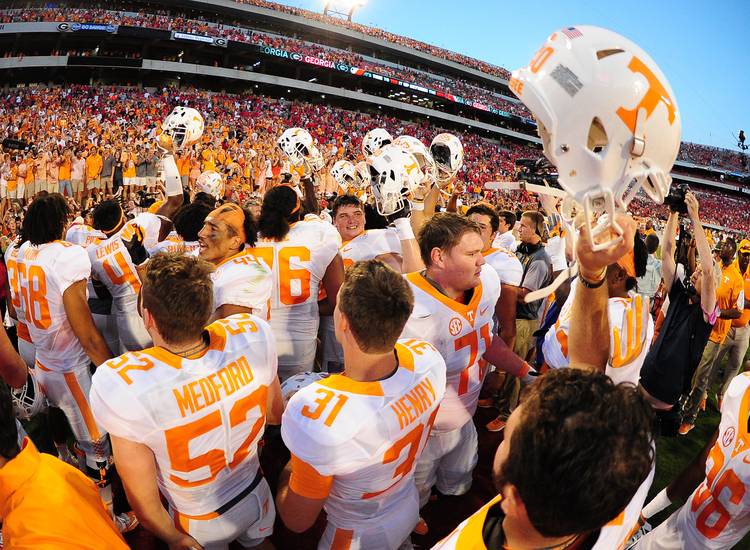 Members of the Tennessee Volunteers celebrate after the game against the Georgia Bulldogs at Sanford Stadium on October 1, 2016 in Athens, Georgia. (Photo by Scott Cunningham/Getty Images)

Today’s team: No. 23 Tennessee (Related coverage: How dare Tennessee hire Phillip Fulmer for only $100,000 a year?)

Best-case scenario: The Volunteers reach the conference championship game if they edge Florida and Georgia in the weaker SEC East. They still aren’t in Alabama’s class but could go to a decent bowl — most likely the Outback or Citrus — if they play for the SEC title.

Worst-case scenario: The season will be considered a failure if Tennessee finishes third in the East behind Florida and Georgia or — gasp! — fourth behind up-and-coming Kentucky. Expect the Vols to end up in a lower-tier bowl such as the Liberty or St. Petersburg if they finish in the middle of the pack.

The key game: Sept. 16, at Florida. It’s the SEC opener for both teams and the winner will have an early jump for the East title. Last year the Vols won a shootout in Knoxville, but the Gators are a different team when playing at The Swamp — 11-1 in Gainesville the past two years.

Dormandy’s time: With Joshua Dobbs now backing up Ben Roethlisberger in Pittsburgh, the Vols are confident that Quinten Dormady is the right man to succeed him. In April’s spring game, he completed all 10 of his passes for 105 yards. Dormady has thrown a combined 39 passes his first two seasons, completing 24.

Getting offensive: Jones is confident the offense will continue to prosper. Last year the Vols averaged 47.8 points over their last five games and scored 30 or more in nine of 13 games. Offensively, the Vols ranked second in the SEC in scoring and fifth in total yards. Their total of 473 points last season ranked second in the conference behind Alabama’s 582.

No. 22: Coming Saturday. Want a hint? This school, which has had three head coaches in the last five years, hasn’t finished a season ranked since 2012.

David Ash, Dylan Haines to suit up for scouts at Spring League Showcase