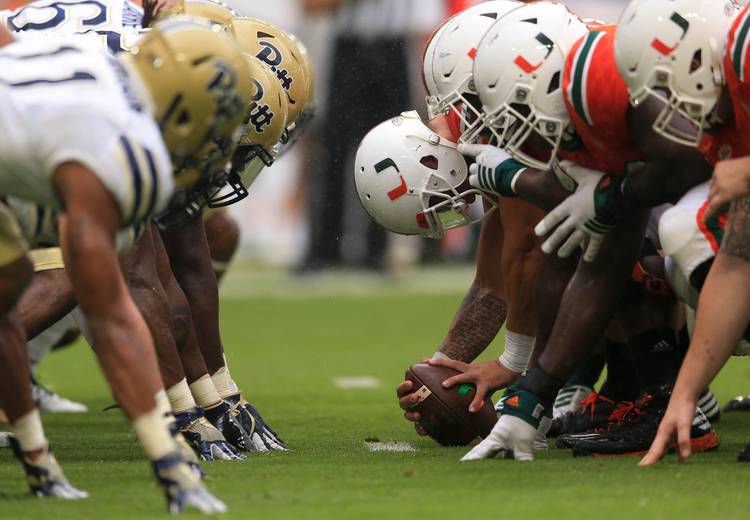 Miami Hurricanes and Pittsburgh Panthers players line up prior to a snap during the first half of the game at Hard Rock Stadium on November 5, 2016 in Miami Gardens, Florida. (Photo by Rob Foldy/Getty Images)

Today’s team: No. 20 Miami (Related coverage: Miami’s Ahmmon Richards has the blazing speed, but also a target on his back)

Best-case scenario: A veteran offensive line that includes four returning starters gives whomever emerges at quarterback plenty of room to develop, and running back Mark Watson has the kind of season that makes him a dark horse Heisman candidate. If the offense finds consistency, the Hurricanes could contend for an ACC title.

Worst-case scenario: Despite one of the country’s best defensive fronts in the country, inexperience behind center leads to multiple three-and-outs and untimely turnovers. A questionable secondary can’t hold up on too many short fields, and the defense regresses.

The key game: Nov. 4, Virginia Tech. The Hokies earned a convincing 21-point home win last season, but playing in South Florida could give the Canes the edge in this showdown between ACC Coastal favorites.

Spring cleaning: All eyes at the spring game were on the unproven quarterbacks, but a gifted corps of receivers stole the show. Ahmmon Richards, an all-conference player as a freshman, juiced up the crowd with a 72-yard touchdown catch, and 6-4 Darrell Langham hauled in two touchdowns. Chris Herndon IV and Dionte Mullins also impressed for the deep unit.

Quarterback shuffle: Miami’s quarterback position took a major hit in the offseason. Three-year starter Brad Kaaya left early for the NFL and 2016 signee Jack Allison transferred to West Virginia. Redshirt junior Malik Rosier, a dual threat who owns the only start on the roster, and incoming four-star recruit N’Kosi Perry appear to be the only options.

Super sophs: Last season, Shaq Quarterman, Michael Pinckney and Zach McCloud were the only trio of true freshmen in the nation to start at linebacker. The fast and physical bunch keyed a defensive turnaround; the Canes rose from 106th in tackles for a loss to fifth, 115th in yards per rush allowed to 17th, 86th in yards per play allowed to ninth and 77th in points allowed to 12th.

No. 19: Coming Tuesday. Want a hint? This school has never had a Heisman Trophy winner, but did have one player selected as a finalist in back-to-back seasons in 1988 and 1989.

D’Onta Foreman has a day, literally, in Texas City