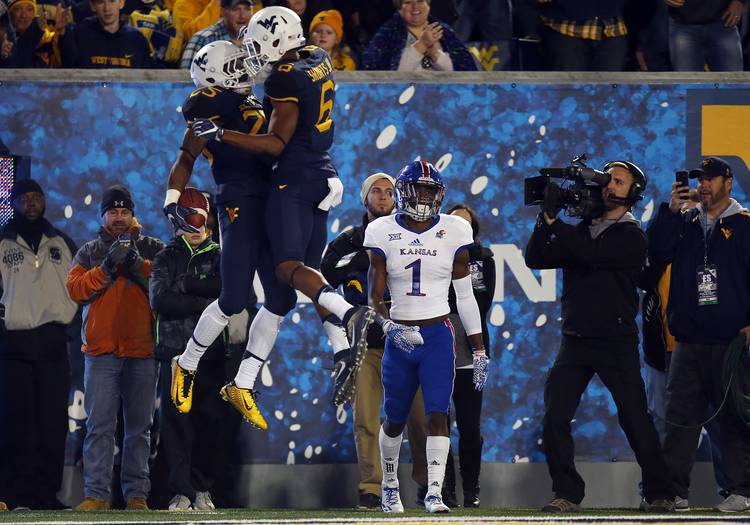 Tyrone Miller Jr. #1 of the Kansas Jayhawks reacts after Justin Crawford #25 of the West Virginia Mountaineers celebrates his 27 yard rushing touchdown in the second half during the game on November 5, 2016 at Mountaineer Field in Morgantown, West Virginia. (Photo by Justin K. Aller/Getty Images)

Best-case scenario: The Mountaineers go 10-2 and play in a New Years Day bowl. There’s a lot of winnable games on the schedule, with home games against Oklahoma State, Texas and Texas Tech. When the Cowboys come to rowdy Milan Puskar Stadium on Oct. 28, it’s realistic to think WVU could only have one loss. There’s concern with the Mountaineers’ defense, but who plays defense in the Big 12 anyway?

Worst-case scenario: Former Florida starting quarterback Will Grier turns out to be a bust and WVU struggles to find an identity. Even if the Mountaineers have to rely on the unproven Chris Chugunov behind center, bowl hopes are almost a certainty. There’s at least seven winnable games on this schedule.

The key game: Oct. 7, at TCU. The Mountaineers beat TCU last year in Morgantown, but if they can get out of Fort Worth with a “W,” WVU should get off to a 4-0 start in the Big 12 before an Oct. 28 home showdown with Oklahoma State.

Spring cleaning: West Virginia had two players drafted and lost nine starters. Howard’s heir apparent, Grier, sat out the 2016 season due to NCAA transfer rules but impressed Holgorsen in WVU’s spring game. Holgorsen told reporters Grier was “as good as advertised” in April. Grier completed 12 of 18 attempts for 202 yards. … It was the first glance at former Texas A&M offensive coordinator Jake Spavital’s play-calling. This is Spavital’s second stint at West Virginia; he was the quarterbacks coach from 2011-12. … The Mountaineers signed the 59th-rated recruiting class in the country — 23 3-star prospects; their top recruit was homegrown in 6-1, 174-pound athlete Derrick Pitts of South Charleston. Pitts was the No. 2-rated recruit in the state. Another signee was junior college transfer Kelby Wickline, a center and the son of offensive line coach (and former Texas offensive coordinator/offensive line coach) Joe Wickline.

Pipeline to Morgantown: The Whites of Macungie, Pa.. are to WVU what the Collins family was to Penn State in the 1980s and 90s. Kevin White Jr., the seventh overall pick in the 2015 NFL draft, began the run. Kevin Jr.’s little brothers, wide receiver Ka’Raun (48 receptions, 593 yds., 5 TDs) and safety Kyzir carry on the White legacy in Morgantown. Ka’Raun should be a big contributor in Spavital’s offense. The Mountaineers are deep in the skill positions.

Getting defensive: In each of the past two seasons, West Virginia has ranked second in the Big 12 in scoring and yards allowed per game and no lower than fourth in yards allowed per play. Defensive coordinator Tony Gibson seems to have found a good scheme to complement the offense, but the Mountaineers had several offseason loses on defense, especially in the secondary which lost All-American cornerback Rasul Douglass.

Road warriors: WVU does have a tough road ahead, especially in November when the Mountaineers travel to Kansas State and Oklahoma. Throw in road games at Baylor and TCU and you arguably have the toughest road schedule in the Big 12. It probably should also be noted that West Virginia lost 31-19 to Kansas in Lawrence, Kan. in 2013, which was the Mountaineers’ second season in the Big 12.

No. 18: Coming Wednesday. Want a hint? This school’s head coach has served on the staffs of Steve Spurrier, Lou Holtz (twice) and Urban Meyer.