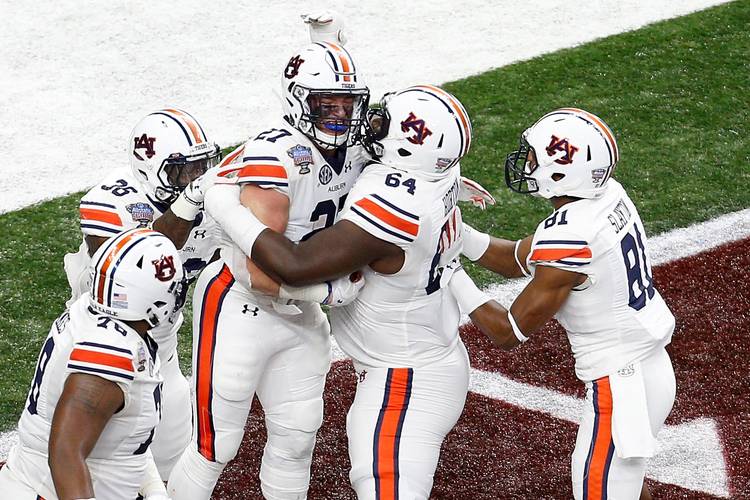 NEW ORLEANS, LA - JANUARY 02: Chandler Cox #27 of the Auburn Tigers reacts after scoring a touchdown against the Oklahoma Sooners during the Allstate Sugar Bowl at the Mercedes-Benz Superdome on January 2, 2017 in New Orleans, Louisiana. (Photo by Jonathan Bachman/Getty Images)

Best-case scenario: New offensive coordinator Chip Lindsey brings some needed explosiveness to the passing game with the addition of Baylor transfer Jarrett Stidham, who completed 16 of 20 passes for 267 yards in the spring game to make things interesting in the battle with two-year starter Sean White. Lindsey’s Arizona State offense threw for 259.3 yards per game, which ranked 30th nationally.

Worst-case scenario: Teams continue to load up the box to stop star running back Kamryn Pettway, who finished fourth among SEC rushers with 1,224 yards along with seven touchdowns. Stidham was the leader on the depth chart after the spring game while White will try to win the job after missing time this spring with a broken forearm and shoulder problems. Lindsey has a huge challenge ahead of him this fall; the nation’s No. 112th-ranked passing attack produced only 12 touchdowns in 13 games last season.

Spring cleaning: The Tigers lost their two best pressure rushers in Adams and Lawson, who combined for 13.5 sacks for the nation’s seventh best scoring defense (17.1 points per game). The offensive line also took a hit as guard Alex Kozan and tackle Robert Left departed. Auburn didn’t throw it effectively but 2016 leading receiver Tony Stevens will have to be replaced.

One magic moment: Remember Chris Davis Jr.’s miraculous missed field goal return to beat Alabama in the 2013 Iron Bowl? It came to be known as the Kick Six. Speaking of six, that’s’ also the Tigers’ only win over the Crimson Tide in the last six meetings. The Tide have outscored them 39-23 in the last three matchups.

Big ‘backers back: Auburn will go as far as its defense will take it, so look for a deep corps of linebackers to lead the way. Tre’ Williams played in the middle for most of 2016 but has the athleticism to move to the outside. He finished with 67 tackles in only 11 games and will surely top his sack total of 3.5 if he can avoid some bothersome injuries that have plagued him over the years. LSU fans remember Williams as the guy who was ejected in 2016 after a helmet-to-helmet hit on QB Danny Etling.

Are these the good old days, Gus?: Malzahn said to the school’s website before the 2016 season that “these next three or four years are fixing to be our best years we’ve had.” Well, the Tigers limped to the finish in 2016 with three losses in their last four games, including a 35-19 no-show against Oklahoma in the Sugar Bowl. The Tigers are 15-11 over the last two years, not exactly dominant though remember they play in the rugged SEC West division that includes their most bitter rival, Alabama.

No. 10: Coming Thursday. Want a hint? This school won back-to-back national championships in 1932 and 1933 with a player who starred at center, linebacker and long snapper — and later became the 38th president of the United States.

Four former Longhorns set to tee off at The Open Championship