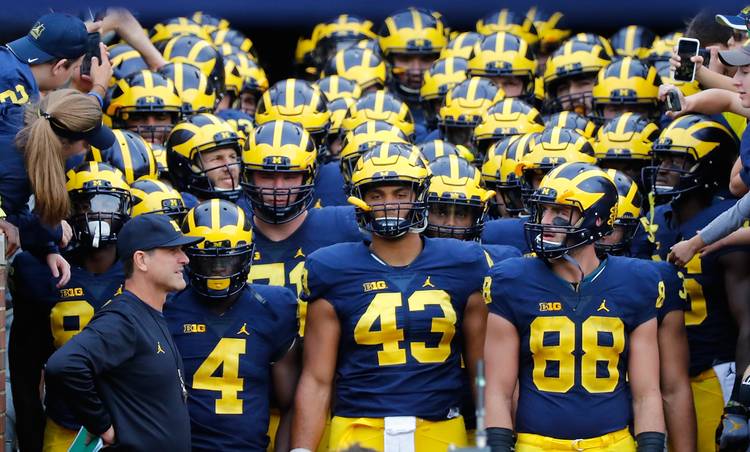 Michigan Wolverines head coach Jim Harbaugh (left) leads his team onto the field prior to the start of the game against the Wisconsin Badgers at Michigan Stadium on Oct. 1, 2016 in Ann Arbor, Michigan. The Wolverines get the Badgers at home again this season. (Photo by Leon Halip/Getty Images)

Best-case scenario: Michigan, just a win or two away from a Big Ten title in Jim Harbaugh’s first two seasons, earns a signature victory for him over SEC power Florida in Week 1 in Arlington. Then the Wolverines roll through the conference and into a showdown at home against Ohio State. A win there puts Michigan into the College Football Playoff for the first time.

Worst-case scenario: The Wolverines come up short in their hopes of reloading a roster that was depleted to graduations and the NFL draft. The running game is inconsistent, causing Harbaugh’s program to dip in Year Three. The defense also must replace high NFL picks in Taco Charlton and Jabrill Peppers.

The key game: Nov. 25, Ohio State. This is the key game for both programs every year. There might not be a more important and more meaningful rivalry in the history of college football; this year’s winner may get one of the berths into the CFP.

Spring cleaning: Michigan made offseason news by taking its spring practices to Rome, yet another move in Harbaugh’s effort to make Michigan a national brand. It also helps in recruiting when you can promise a teenager a free trip overseas to practice football. … No team in the country must replace more starters than the Wolverines; the team returns only one defensive starter but strong recruiting classes mean Michigan is likely ready to reload. Look for five-star defensive line prospect Aubruy Solomon and five-star wide receiver Donovan Peoples-Jones. The 2017 signing class ranked fourth in the country.

Roster overhaul: It’s unusual for a coach to face his toughest coaching challenge in Year Three. But Harbaugh, who’s gone 10-3 in back-to-back years to start his tenure, will be hard-pressed to duplicate that 2016 success with more starters lost from last year’s team than any other FBS school. The talent is on campus, but most of it is inexperienced. Young teams tend to be inconsistent.

Running when it matters: Harbaugh — a former quarterback — is known for his hard-nosed approach to running the football. His stops at Stanford and the San Francisco 49ers have been proof and his first two Michigan teams have followed that blueprint. Yet Michigan averaged only 2.4 yards per carry in the three losses last season.

Who’s next?: A fan base like Michigan’s doesn’t allow for excuses. Harbaugh won’t be allowed to use the 2017 season as a platform for 2018. He’ll be expected to win 10 games and compete for the Big Ten title, something that’s alluded the Wolverines since 2004. Only five starters return. Michigan has recruited well over the past three cycles, so the question becomes: Who are the next stars? Eleven Wolverines were drafted this year, more than any other school in the country.

No. 9: Coming Friday. Want a hint? This school produced the 1988 Heisman Trophy winner who went on to become a member of both the Pro Football and College Football Hall of Fames.

On Second Thought Ep 63: Tom Herman and the Longhorns at Big 12 Media Days