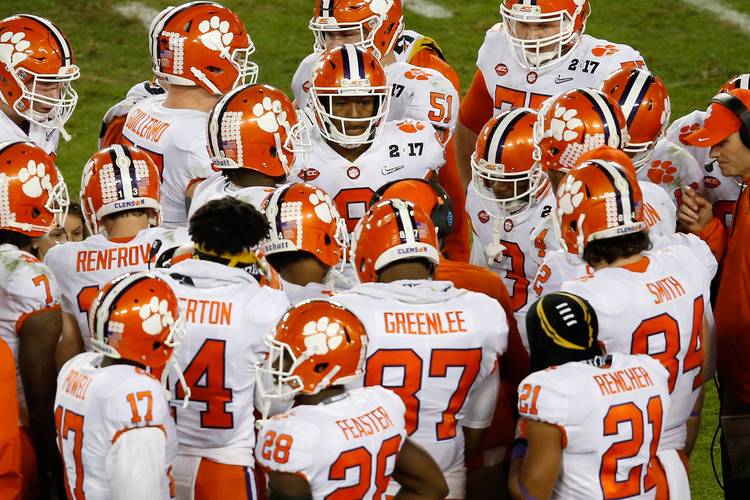 TAMPA, FL - JANUARY 09: The Clemson Tigers huddle during the second half of the 2017 College Football Playoff National Championship Game against the Alabama Crimson Tide at Raymond James Stadium on January 9, 2017 in Tampa, Florida. (Photo by Brian Blanco/Getty Images)

Today’s team: No. 5 Clemson (Related coverage: Here’s why Clemson will repeat as ACC champs … and here’s why it won’t)

Best-case scenario: The Tigers overcome the losses of some huge names, including two-time Heisman Trophy finalist Deshaun Watson, and return to the College Football Playoff for the third straight year.

Worst-case scenario: A bunch of unprovens at quarterback surprises no one by not being Watson and the Tigers suffer a post-championship collapse.

The key game: Sept. 9, Auburn. Auburn is expected to be a top-10 team and Clemson may be there for the taking early in the season.

Spring cleaning: Todd Bates came over from Jacksonville State to coach the defensive tackles. … Defensive ends coach Marion Hobby left for a job with the NFL’s Jacksonville Jaguars. … Mickey Conn was promoted from defensive analyst to safeties backs coach. … The Tigers weren’t able to turn their national title into a top-10 recruiting class; Clemson’s class ranked 16th nationally but did include two five-star players in QB Hunter Johnson and wide receiver Tee Higgins. Both were rated as the No. 2 national prospects at their positions by 247Sports’ composite rankings.

Passing: None. No current QB attempted a pass in 2016.

From Boyd to Watson to …: Clemson fans have been spoiled by QBs Tajh Boyd and Deshaun Watson over the last handful of seasons. Four players — Kelly Bryant, Hunter Johnson, Tucker Israel and Zerrick Cooper — competed in the spring game. Israel was 13 of 19 passes for 94 yards and a touchdown. Swinney told reporters that Bryant — a junior who completed only 4 of 13 passes for 43 yards and an interception with 66 rushing yards — is No. 1 on the depth chart.

So long, Mike Williams: With Mike Williams gone, the onus is on Ray McCloud, a capable possession receiver, to take another step forward. He’s caught 78 passes for 723 yards and three TDs over the last two seasons. Deon Cain, a 6-1, 210-pound junior, will stretch defenses. He was dangerous a year ago with a team-leading 19.1 yards per catch and nine touchdowns.

Shoring up the defense: Swinney will need his defense to be more consistent than it was in 2016, when the Tigers gave up 34-plus points three times. Christian Wilkins, Austin Bryant, Dexter Lawrence and Clelin Ferrell will bring experience up front while Trayvon Mullen, Mark Fields, and Ryan Carter will see time in the secondary.

No. 4: Coming Wednesday. Want a hint? This school produced the first two-time winner of the Lou Groza Award, given to the nation’s top kicker. His nickname was the “Polish Powderkeg.”