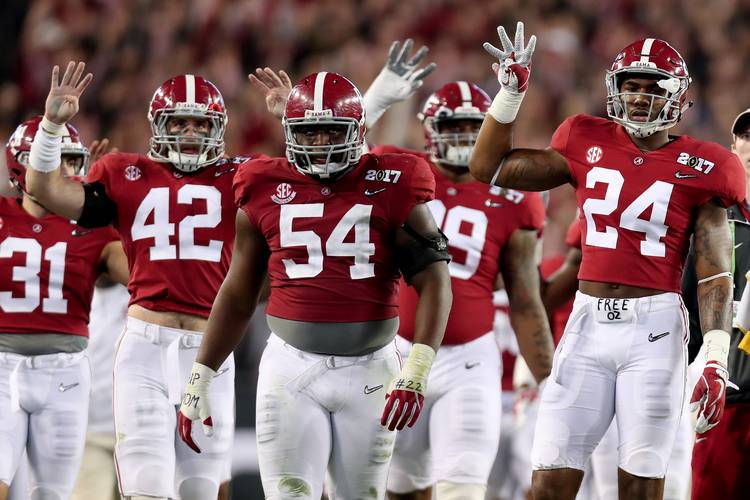 Today’s team: No. 1 Alabama (Related coverage: Has Nick Saban made the SEC Bama and, well, everyone else?)

Best-case scenario: Nick Saban never retires and Alabama enters every season as a national contender from now until 2050. The Crimson Tide, still ticked off about losing last year’s championship to Clemson with one second left on the clock, use that as fuel to take it out on the rest of college football with Heisman-caliber quarterback Jalen Hurts, the best running backs in the nation and the best head coach ever to walk a sideline.

Worst-case scenario: Big losses on defense and the offensive line, with seven NFL draft picks, combine with a nightmarish season-opening matchup with Florida State and a new offensive coordinator calling the plays, to cost Alabama. The Tide actually lose a game or two and just wind up in the consolation Sugar Bowl.

The key game: Nov. 25, at Auburn. In one of only four true road games all year, Alabama faces a resurgent Tigers team that has recharged with former Baylor quarterback Jarrett Stidham. Remember, an Auburn loss has cost Alabama dearly before, whether it’s Cam Newton or a missed field goal return.

INSIDE THE CRIMSON TIDE

Spring cleaning: The addition of new offensive coordinator Brian Daboll should actually settle things down in Tuscaloosa; Kiffin took a lot of drama with him and Saban has a comfort level with Daboll, who was a GA on his Michigan State staff and has coached in the NFL for the last 17 years, 11 of them with the New England Patriots. … Replacing Griffith will be critical. Second-team All-America punter JK Scott could do double duty if a reliable kicker can’t be found in Andy Pappanastos, who missed two 30-yarders in the spring A-Day Game, or true freshman Joseph Bulovas. … Da’Ron Payne should anchor the defensive line, but much is expected from 6-4 ends Da’Shawn Hand and Quinnen Williams. … RT Jonah Williams shifted to the left side, playoff sensation Rashaan Evans moved from edge rusher to inside linebacker, and Trevon Diggs has settled in at cornerback after playing safety, receiver and punt returner last season.

Hurts is so good: Hurts struggled with his passing in the playoffs. He was the first true freshman to start as Alabama’s quarterback since 1984 and has to break in several new receivers and offensive linemen, though outstanding receiver Calvin Ridley is back and running back Bo Scarbrough is coming off a sensational postseason. Hurts figures to drop back more from under center, but should still be a lethal runner after rushing for 954 yards.

Road-friendly: The schedule is favorable with road games only at Texas A&M, Mississippi State and Auburn after the neutral-site opener with the Seminoles in Atlanta’s new Mercedes-Benz Stadium, the site of the 2017 national championship game. Phil Steele’s magazine ranks Alabama’s schedule as the 28th toughest.

He can coach .55: Did you know that Saban’s bowl record is only a stunning 11-9 in his career? (That does, however, include playoff losses to teams like Clemson and Ohio State.) Alabama has never won a title as a preseason No. 1 under Saban, but we doubt he minds.